Alice Can Dance: thinking their moves

Above: All on stage for the finale of Our planet, our future. All photos by Anna Snowsill.

Who knows what hard times the children of today, even in as privileged a country as Australia, will have to deal with in the future as a result of all the challenges facing the world. But those who participated in Alice Can Dance 2019 will surely draw strength from having started to think about them early.

Thinking in a deep way, with mind and body.

In this unique part of local public school offerings, children enter a seven-week program with dance company GUTS, led by Frankie Snowdon and Madeleine Krenek. The program culminates in a performance at Araluen, two in fact, which took place last Friday.

Under the title Our planet, our future, we saw a blend of video and dance, in separate inter-leaved segments feeding into and off one another and progressing through stages of understanding and self-expression. There was no sign of the children been told what to think, other than in them having absorbed a range of influences, from school, family, church, media. From the program itself there was rather every sign of them being stimulated towards thinking through all of this together with their experience of the world around them. 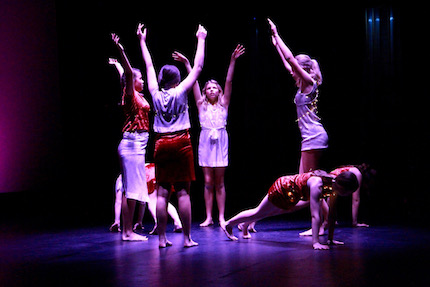 Whatever else the process imparted, joy was the big takeout. Joy in being alive, being with one another, having the opportunity to think, articulate, and use their bodies to make meaning. So even though they showed awareness of the big issues we are all facing, there was no air of defeat or anxiety. The exercise – physical, mental and collective – has been robust-making.

The children were filmed in pairs, looking straight to camera. They bounced off one another, often humorously, as they took a stab – an “honest crack” as one boy put it – at answering questions put off camera. From their answers it became apparent what the questions would have been.

The age of the Earth must have been the starting point. Thousands of millions of years, fifty years, two thousand and nineteen years were all ventured. Old anyway. In the dance prelude to this, older girls and a boy, alumni of past programs, entered the darkened auditorium from the back, moving forward to the stage, tiny electric lights wrapped around their torsos, creating a primordial ambience.

Where did the Earth come from? The Big Bang, God (the answer depends on your religion, this girl explained), “might be a stick”, there was once a place called “Goannaland”. This led into a dance of the dinosaurs, by students from Ntaria School.

The children then must have been asked to think about what the word ‘environment’ means to them. “A place of togetherness,” a boy suggested; “humans are part of nature,” observed a girl. Antartica is the best environment; the desert is beautiful; it’s sacred land (this child ventured a version of the Caterpillar Dreaming); Aboriginal people were here first. A girl from Ntaria talked about her homeland being in the shape of a dog: “You can see it on Google,” she assured us. 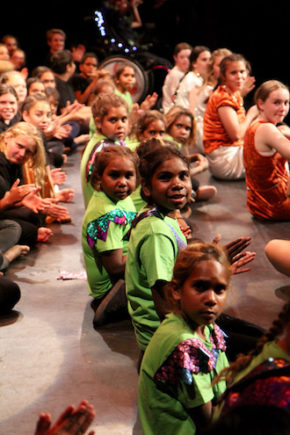 The dance that followed this expansive vision came from Acacia Hill School students, who have a range of disabilities – and of abilities. Some of the dance company and support workers were on stage with them and as an ensemble it was a great demonstration of “a place of togetherness”. The audience particularly loved the solos, or rather duos, with the students in wheelchairs.

The dance sequences, by different school groups, moved on through representations of the layered natural world – the oceans and waterways (blue streamers on the costumes), the Earth’s crust (red and orange bandanas), the atmosphere (silvery capes). The moves seemed to be about how everything is intermeshed – what happens to one, happens to all.

They must have been asked about the challenges or threats to the environment. Many of them named threatening natural phenomena that have always been with us, to greater or lesser degrees – bushfires, sinkholes, avalanches, volcanic eruptions, tsunamis (a “rollercoaster” from which you “run for your life”), while some also articulated the new threats of global warming and sea rises.

A large group of dancers, some with red kerchiefs over their mouths, evoked a polluted world; others in green kerchiefs perhaps represented valiant efforts to do something about this.

The children talked about a possible end for the Earth, about the loss of species. “Can we stop chopping down trees?” pleaded one. “Animals are getting killed because of us,” said another, then specifying, “not us little kids.” Fair point!

Dancers from Ross Park School did a very effective sequence about the rising dominance of technology. “Right now the environment is not at its happiest time,” observed one child. But, “the entire world” working towards a better future “could make a difference,” said another. “No more wars!” exhorted a third. Technology could be used to “save the world.”

That better world would be a place with lots of kids playing; more supermarkets and new houses (this from a girl in Ntaria); there would be flying cars and you could get your licence at age eight; you could play football everyday. A dance showed children in separate blocks, melding, separating, melding again; fists were raised, to cheers from the audience. 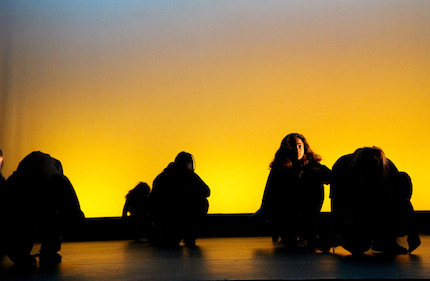 We saw video of the dance classes. These must really be the highlight of the year for many students and a memory to treasure into the future. The discipline involved in working towards a group performance seemed to come from the equality and respect afforded each and every participant. This was not about anyone being a star or being cute, it was about what was meaningful, expressive, do-able and fun.

A girl wanted to be “out in nature every day”; a boy wanted to live “a really good life”, to go outside and “not be a couch potato”.  A girl suggested that “you have to treat the environment how you want to be treated”. She realised the potency of her message, and pointing to the camera – us all – she said “I’m looking at you.”

From the mouths of babes.

Bouquets to the adults who have worked with them:-

The program was directed by Frankie Snowdon and Madeleine Krenek (GUTS Dance); co-facilitated by Katina Olsen, Ashleigh Musk and Hans Ahwang. Video and photography was by Anna Snowsill and Jonny Rowden. It was produced by Elizabeth Verstappen and Sadadeen Primary School (there was a heartfelt farewell and thanks on stage to Ms  Verstappen who is shortly to retire. Costumes were a creative team effort.

Painting and dancing pictures of their worlds