New mines in The Centre – a snapshot 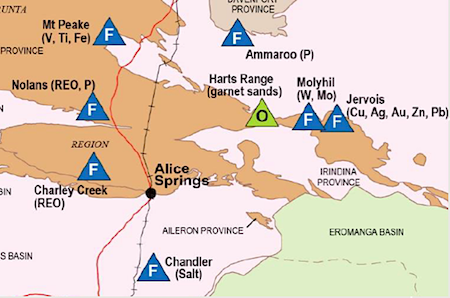 Five mines in The Centre are in varying stages of development, Bill Sankey, from the NT Department of Business, told the Rotary Club of Alice Springs this week.

None have reached Final Investment Decision, he said, but if even just two make it into production, and that is likely, the economic advantages for Alice Springs would be significant, ranging from a big boost in employment to lower airfares for FiFo operations.

Better still, Mr Sankey agreed with a guest, would be workers and their families living in town.

If all projects came to pass, 1755 people would be employed during the construction phases, and 1155 during operations.

The five companies would be splashing $2.6bn in capital and $584m a year on operational expenditure.

In he context of the habitually controversial mining, the projects are mostly benign: None are digging for coal, the controversial fracking is not involved (most of that will take place in the Beetaloo Basin further north) and the rare earth to be mined at Aileron, just some 100 km north of town, will be used for building electric cars.

The only doubts raised last night were about concerns by the Titjikala population over the planned Tellus salt mine, which will double as hazardous waste storage; the adequacy of requirements for rehabilitation of mine sites, and the capacity of smaller companies to ensure the safety of their employees.

• Arafura Resources – Nolan’s Rare Earth Project: Is located on Aileron Station some 135km North of Alice Springs. The mine is an open-cut and the rare-earths are associated with apatite a phosphate bearing ore. The current total resource for the project is some 56 million tonnes containing 2.6% total rare earth oxides and 11% phosphate. 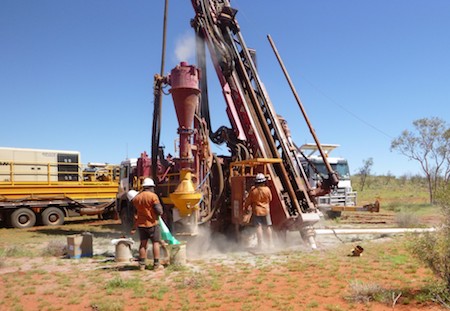 Benefits to the community include jobs, and local business opportunities as the project based on current reserves (a sub-set of the resource figure above) will operate for 23 years.

PHOTO: Drilling at Molyhil near Jervois.

Construction employment associated with the project is in the order of 375 FTE, 500 at peak with Operational employment at mine site of 370.

The project completed an environment assessment in 2017, however the decision in 2018 to site the separation facility in the Territory will require a determination by the NT EPA as to whether further assessment will be required.

• KGL – Jervois Base Metal Project: Is about 270 km east north east of Alice Springs off the Plenty Highway. Mining will be a mix of open-cut and underground, with processing consisting of froth flotation to produce a copper, gold and silver concentrate and a lead-zinc concentrate. Total concentrate production in the order of 150,000 tonnes per annum.

The project had a global resource of about 25.2 million tonnes, (384,000 tonnes of copper ore, 23.6 million ounces silver and gold, lead, zinc) and is working to produce a revised ore reserve, as recent drilling has at key deposits increased the copper reserves.

Operations will occur over a period of 12-15 years. Construction employment: 360 FTE. Operation employment: 300 FTE. This project has its mineral leases in place and is at this stage working to secure project finance and finalising its environmental assessment.

• Tellus – The Chandler Project is about 120km south of Alice Springs and consists of a salt mine and deep geological repository.

The project completed an environmental assessment in November 2017. It is progressing a number of matters including land tenure, Maryvale Road upgrade, working with regulators on approvals and policy questions.

• TNG – Mount Peake: The Mount Peake Mine is about 280km north of Alice Springs. The mine will be open cut and produce a magnetite concentrate that is to be transported to a process facility located at Middle Arm in Darwin.

The mine has completed its Environmental Assessment, secured its mining tenure and working towards it authorisation under the Mining Management Act.

• Verdant Resources: The Ammaroo phosphate project is a proposed open cut mine some 180km southeast of Tennant Creek.

Based upon the environmental assessment completed in October 2018 it will have construction employment of 300 FTE, to be varied with scope with Operational employment of 165 FTE from year six when it will reach peak production of about two million tonnes per year of rock phosphate.

Verdant has recently delisted from Australian Stock Exchange following stock buyout. They will need to formally advise of change in scope and revised project schedule.

Mr Sankey says all five projects have “Major Project Status” which the government awards on the basis of a project’s significance, strategic impact, complexity, feasibility, a proponent’s capacity to deliver, whether there is need for government support, as well as local industry participation, workforce development and social impact.