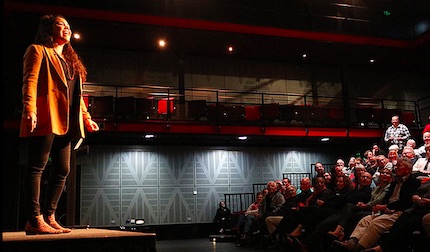 The Town Council is holding a Special Meeting tonight to consider the location of the national Aboriginal art gallery – the NT Government’s land swap deal.

The meeting will be behind closed doors and, once again, Councillor Jacinta Price, pictured at a venue on her interstate speaking tour, will be absent.

Cr Eli Melky says he hopes council will come to a decision about the land swap one way or the other and that, either way, he will push to have the matter brought into the open.

Cr Marli Banks has also said she wants the matter brought into the open but she does not think council should make a decision before it sits down with Mparntwe custodians. On this issue, Cr Melky says if a decision by council tonight is  in favour of the offer, it should lead to public consultation including with custodians as an immediate  next step.

If council rejects the proposal, he expects that its terms and the reasons for rejecting them would be fully explained.

However, he says, the government may request that the matter remain confidential, just as any other party could with whom council was dealing on confidential business. He is also not confident that a majority of councillors will support the matter being brought into the open.

As they consider these issues, Cr Price will be addressing an audience at the Jetty Theatre in Coffs Harbour, the third last stop on her speaking tour (these are ticketed events, $37 for adults) which began on 26 August in Adelaide.

This was the date of council’s last ordinary meeting – an entirely predictable occurrence as they always fall on the last Monday of the month, unless that date is a public holiday.  At this meeting, for the first time, a majority of councillors rejected Cr Price’s apology for her absence.

The Special Meeting tonight is classified as an ordinary meeting, which means that council’s full decision-making powers apply. A decision made at this meeting would be a formal council decision.

Do the same attendance requirements apply? In other words, is a formal apology for absence required, which can either be accepted or rejected by majority vote? If it were rejected, would this constitute the second consecutive ordinary meeting from which Cr Price was absent without permission, a situation which, under the Local Government Act,  could lead to her being excluded from office.

The answer is apparently not straightforward. The Alice Springs News is endeavouring to obtain clarity.

Of course, excluding Cr Price from office would result in a  by-election and, as much as some might want to send the councillor a message about her poor attendance record, the cost of a by-election (estimated at $90,000) would also be weighing on their minds.