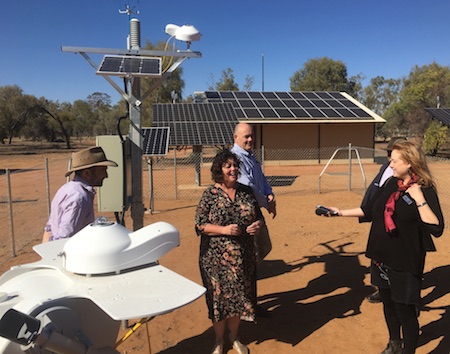 Just hours before a secret meeting of the town council gets under way to discuss the sale of its civic centre land to the NT Government for a national Aboriginal art gallery (a swap deal), Minister Dale Wakefield this morning has made it clear that the project’s future – at least for the time being – will depend on the decision of the councillors and Mayor Damien Ryan.

Consultation about the gallery’s location with custodians via the Aboriginal Areas Protection Authority as well as the native title organisation Lhere Artepe are still inconclusive.

Ms Wakefield described the recent Ernst and Young report as a “first step” and foreshadowed a further report would be needed, saying there needs to be “further business case work once we have a location but what it does show are the benefits”.

She also made clear that the government had urged the town council to discuss the gallery issues in open council rather than behind closed doors as will be the case today.

“We really need to re-set the conversation around the art gallery,” said Ms Wakefield.

“This is a really good project for the town … increasing visitation, putting downward pressure on air fares and providing jobs for particularly Arrernte and [other] Aboriginal people. There are many more conversations to be had. Ernst and Young are a very reputable organisation.

NEWS: They say the report is preliminary and highly indicative, and there are a number of obstacles to producing a credible Cost Benefit Assessment … the absence of a preferred site, a detailed project scope and corresponding design are needed for a full Business Case Assessment. We still don’t have one.

WAKEFIELD: No, we have the business case that is appropriate for this time. It gives us an indication the project is worth-while.

NEWS: Ernst and Young are not saying that.

WAKEFIELD: We need the council to make a decision so we can land on a site and go to the next step.

NEWS: Ernst and Young are saying they have not provided a view on the technical and financial feasibility of the project. It is a useful starting point as part of the strategic assessment.

WAKEFIELD: I think what they said is exactly what we’ve said all the way through, this is an important starting point to a very complex project and it will be good for Alice Springs. We are now waiting to hear back about the civic centre site.

NEWS: How can the council make a decision when they don’t have a Business Case Assessment.

WAKEFIELD: We have given the council an offer for their land.

NEWS: Why would they give their land to a project that is unclear?

WAKEFIELD: Why would their decision making be based on the success of this project? We’ve given them an offer that is about the land and what happens next is probably out of the remit of the council’s decision making. We’ve given them an offer that includes a new library, a new town hall, a substantial financial offer for a piece of land that they own. Do they need to have an input into what happens next, when they are not involved in the project? We are happy to have conversations with them. What would you see their role being?

NEWS: Perhaps to decide whether this is a worth-while project and that is not established by this report.

WAKEFIELD: We have given them a very substantial offer which they have to consider.

WAKEFIELD: It is in confidence at the moment. We are more than happy to be public about the offer but we want to do that with consent of both parties. I have actually written to them and said that we are happy for the offer to be public. We think it is a very generous offer. They can choose not to sell the land.

Minister Wakefield said the offer includes money for master planning “which they have been talking about for many years”.

NEWS: While you want the gallery to be north of The Gap, you are happy for the cultural centre to be south of it.

WAKEFIELD: The art gallery is a totally separate project. The centre is a matter for the people running it. That project is run by Arrernte people and we are absolutely taking their advice where they want to put it. There is $20m on the table for that project, as well as a full-time project officer whom we are currently funding.

NEWS: How close to a decision do you think you are in the negotiations with traditional owners about the location for the gallery?

WAKEFIELD: We are waiting for council. Once we know whether that land is available or not, that will impact our decision. At this stage we want to continue conversations with the council. We will continue to have conversations with a range of traditional owners and we will also be going through an Indigenous Land Use Agreement (ILUA) process as well.

Minister Wakefield says the talks are with the Aboriginal Areas Protection Authority as well as the native title organisation Lhere Artepe for the ILUA.

PHOTO AT TOP: Minister Dale Wakefield (centre) at the launch of the Northern Territory Solar Resource project this morning, wearing her hat as the Minister for Renewables, Energy and Essential Services. She is pictured (from left) with Lyndon Frearson, Steve Rogers and Andrea Johnson from Intyalheme, Centre for Future Energy.