Above: Marlene Rubuntja from Yarrenyty Arltere Artists, among the several artists who launched the exhibition, invited visitors to go inside … with their credit cards. She got a good laugh. It had worked for her: her soft sculpture, Woman with Dilly Bag and Dilly Bag Hat, was acquired by a national institution. To her right is Felicity Green, Araluen director, and seated, artist Hubert Pareroultja from Iltja Ntjarra Many Hands Art Centre. His watercolour, Tjoritja/West MacDonnell Ranges, was acquired by Araluen, along with the three other entries from this art centre, all of them responding to works done by their artist fathers.

In a corner of the large gallery at Araluen, where the annual Desert Mob opened last Thursday, there was a flurry of masculine energy. Young men posed for the cameras in front of a large canvas in the Papunya Tjupi hang; somewhat older men did the same in front of the display from Nyinkka Nyunyu in Tennant Creek.

In both centres there has been a surge of creative activity. 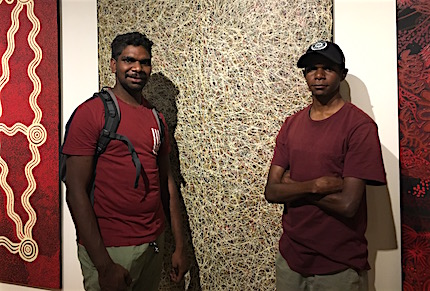 At Papunya Tjupi, a painting camp for young men was held last October at an outstation not far from the community, itself about 240 kms north-west of Alice Springs.  It was hot, so hot Zachius Turner was “suffocating” but despite feeling lazy from the heat and uncomfortable with the thick flies (he nearly swallowed two) he set to work with his peers to learn from their elders, practising painting  rockhole motifs on the wreck of an old car: “We didn’t leave a single space.”

In the afternoon, they prepared for a visit from the senior painters of the art centre, “the ladies”. These accomplished artists, descendants of some of the stellar painters of earlier Papunya Tula fame, came into their own following the establishment of their new art centre in Papunya 12 years ago. (There had been a long hiatus when Papunya Tula moved west in the wake of the Pintupi exodus from the community in the early ‘80s) .

At the painting camp, the young men cooked kangaroo tails for the ladies who in turn taught the young men to “paint our grandparents’ dreaming”. Old men were painting too, among them Carbiene McDonald, who took up a brush at the camp for the first time. The artist has since won Australia’s richest landscape art award, the $100,000 Hadley’s Art Prize. (He does not have a work in Desert Mob but there is one in the Vincent Lingiari Art Award showing at Tangentyere Artists.)

For Zachius Turner, though, the most exciting news is the advent of a new men’s painting space at Papunya Tjupi – the first time there’s been such a designated space in the community for 50 years.  A separate men’s space is important, he said, as young men “feel a bit shamed” working in a women’s space. Now, that Papunya Tjupi has theirs, other art centres might get “a bit jealous”. 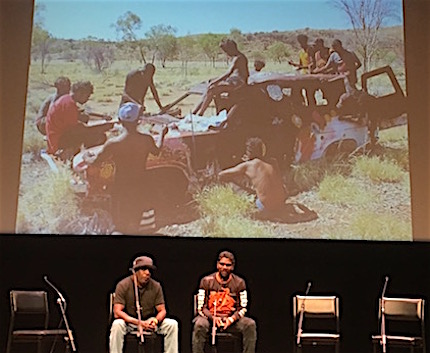 He and his  male peers aren’t showing work at Desert Mob (with the exception of the men’s collective painting, on which some of them collaborated), but that will come, with an exhibition of their first body of work out at Papunya Tjupi’s gallery in October. In the meantime, Turner was making the most of the exhibition, proud of his own art centre’s work but also looking at what other artists have been doing.

He was keen to know if I had a favourite. He did – the towering Kalipinypa by the Kalipinypa Women’s Collective, the revered ladies he’s been learning from. All of the Papunya Tjupi exhibits were about this lightning and rain dreaming place, where over 40 artists and family members had made a recent country visit, some of them for the first time. This is Turner’s mother’s father’s dreaming and is also what he paints.

His second favourite painting was from further afield, Night Sky from the Gap by Camilla Young from Keringke Artists. He was captivated by its subject but also admired its immaculate technique (a hallmark of Keringke work)  –  the fine dotting, the perfect circles, the carefully organised composition.

Such an approach couldn’t be in greater contrast to the work coming out of the Nyinkka Nyunyu Art and Culture Centre in Tennant Creek, the highway town some 500 kms north of Alice. From year to year at Desert Mob, different art centres make their mark doing something unlike anything else in the room, unlike anything you might have expected. This year it was Nyinkka Nyunyu’s turn. 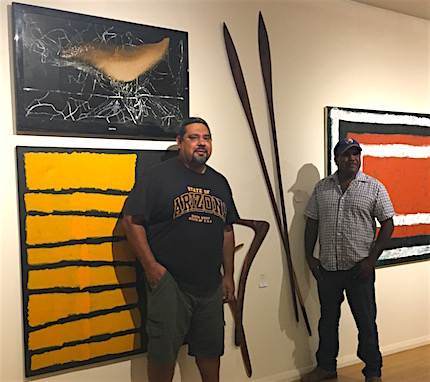 The display is eloquent about their story, with Punishment Spears (carved by Jimmy Frank, on the right in the photo) and No. 7 Boomerangs (carved by Joseph Williams, also pictured) asserting the foundation in Warumungu identity and tradition of what the men are doing. They call the display Wanjjal Payinti – meaning past and present.

Either side of the artefacts are the untitled paintings of Marcus Camphoo, striking for their bold geometry and colour and, up close, for their way of laying paint on the linen. He’s a young artist but he knows what he’s doing.

Alongside are the works of Simon Wilson – two versions of a desert storm, conjuring swirls of wild dust-laden winds, one of them painted directly onto a shattered television flatscreen. They act in the display as a kind of bridge – a gritty, urban bridge – to the utterly distinctive figuration of Fabian Brown.

In his catalogue statement Brown says he likes travelling, mentioning other places he’s been to all over Australia, but it’s clear his mind and eye like to travel even further afield, with the influence of contemporary international visual cultures clearly evident in the work while thoroughly integrated with his own vision and identity.

In his commanding The Angel, the wings are iconic white, but the face glimpsed beneath its intriguing yellow headdress is black. The human-like figures in Mystical Animals have a comic book familiarity, but the battle that appears to have been waged between his giant dog- or wolf-like creatures is redolent of ancient epic stories. The Samurai Warrior, on which he was assisted by Clifford Thompson, is more straightforward in its reference, but accomplished very much in the Brown style – the insistent centrality of the subject, the graphic drawing, the vigorous painting. 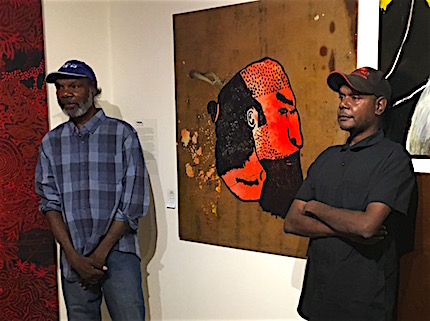 At the symposium on Friday he came on stage with Joseph Williams and Jimmy Frank, all of them in white feather headdress, singing in language, clapping with boomerangs.  It was Williams and Frank who outlined the history and vision of Nyinkka Nyunyu. Brown spoke only briefly: “We respect our old ways,” he said, “but this is a new way of doing art.”

This new way has its roots in a well-being workshop for men that started in 2016 at Anyinginyi Health, with artist Rupert Betheras leading the art program. As Joseph Williams notes in his catalogue contribution, “it turned out to be big – exhibitions, catalogues and all.” And as Jimmy Frank noted at the symposium, we’ve heard “all the bad stories” about Tennant Creek, but these are “the good things” they are doing.

Desert Mob renews this kind of corrective year after year, challenging or rebalancing our downbeat take on “Aboriginal affairs”, especially in remote Australia, with its clear evidence of vitality, cultural strength and inspired creativity. This is far from limited to the two art centres I have singled out here. Walk around the three rooms of the exhibition: in every corner there are works of interest, and among them, some of outstanding beauty and depth. 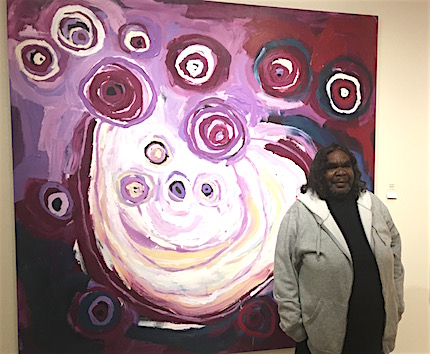 Behind many works, even the more modest works, there are bigger stories of creative endeavour and opportunity. For instance, numerous desert artists will be showing at Adelaide’s Tarnanthi, a national showcase of contemporary Aboriginal and Torres Strait Islander art opening next month. Among them, artists from Barkly Regional Arts with their Warumungu Language Repatriation Project, and artists from the APY Lands with a big creative project around the tjakura, the great desert skink.

Barbara Moore from Tjala Arts meanwhile is set to have her first international solo show, at the prestigious Kluge-Ruhe museum in Virginia, USA.  She is shown at left in front of Ngayuku Ngura (My Country), painted in her distinctive style.

More than 200 artists are represented in Desert Mob; many more are active when you consider some of the big names missing from the show, obviously in too much demand elsewhere, and the many others whose work was available at the Market Place on Saturday. Considered in light of the region’s population, it is phenomenal and underlines the absolute sense and worth of the support artists and art centres get from their appreciative audiences and from governments.


Below: The first visitors to Desert Mob, no doubt armed with credit cards, set up camp outside the doors of the art centre at 6am last Thursday. Here, they are at the end of the day, sipping champagne, ahead of the doors opening. Tourism Minister Lauren Moss in her launch speech suggested that Desert Mob “now attracts some 10,000 visitors each year from around Australia and the world”.  In a later clarification for the Alice Springs News a spokesperson said the 10,000 included visitors from interstate and overseas. Last year Araluen reported that close to 7,000 people visited Desert Mob on opening weekend, with another 4,000 people visiting the exhibition across its six-week run in the galleries.

At bottom, the opening night crowd included South Australian Premier Steven Marshall, in suit and sunglasses, standing next to Lingiari MHR Warren Snowdon, and Federal Arts Minister Paul Fletcher, en route to the APY Lands for a visit to their illustrious art centres.

By ERWIN CHLANDA The NT Gunner Government’s decision to sacrifice an area bigger than Belgium to the fracking industry is stupid at a time when...
Read more
Issue 1