Boy from The Centre to address UN Human Rights Council 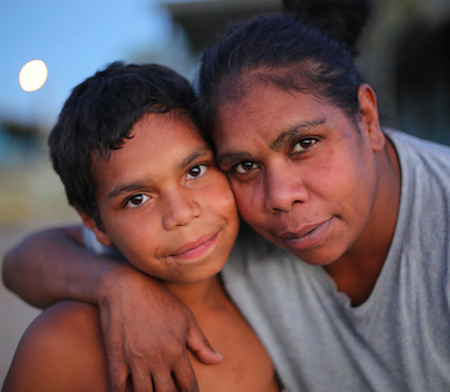 A 12 year old Arrernte / Garrwa boy from Central Australia will give a speech at the world’s peak human rights body in Geneva tomorrow, with a simple message for Australian governments: stop sending 10 year old children to to prison.

Dujuan Hoosan, pictured with his mother Megan, is the young star of the acclaimed documentary, In My Blood It Runs.

He has travelled to the 42nd session of the UN Human Rights Council with his grandmother and father to share his own experiences with the youth justice system and build support for Aboriginal-led education models.

“I will be a bit shy to speak to all the countries at the United Nations because adults never listen to kids – especially kids like me. But we have important things to say,” said Dujuan.

“I was so worried about being taken away from my family and I was nearly locked up in jail. But I was lucky because of my family. They are strong, they love me and they know I am smart. They found a way to keep me safe. I am alright now, but lots of kids aren’t so lucky.”

Currently in all Australian states and territories, 10 year old children can be arrested, charged and sent to prison.

The Human Rights Law Centre, which Dujuan is addressing the Council on behalf of, has been calling on Australian governments to raise the age of criminal responsibility from 10 to 14 to bring Australian standards into line with international law.

The film will be screened at the UN, hosted by Australia’s Permanent Mission, showing Dujuan as a 10-year old when he was struggling at school and facing increasing scrutiny from welfare and the police.

PHOTO of Dujuan and Ms Hoosan by Maya Newell.