Council: yes to protecting NT drinking water from fracking, no to declaring a climate emergency 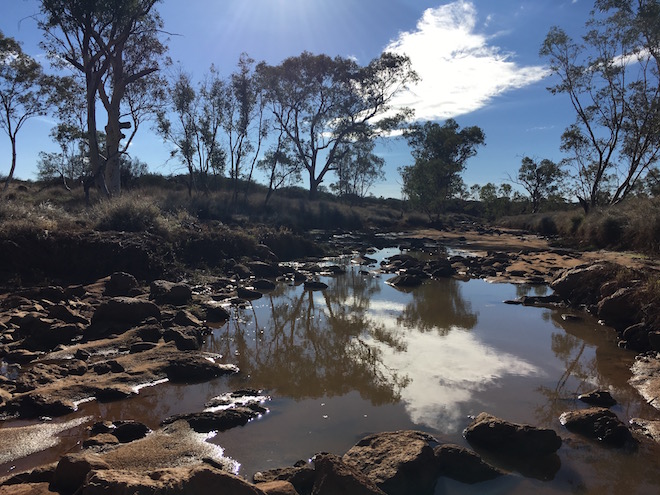 Above: Water in the Todd River north of the Telegraph Station in June this year. The whole of the Alice Springs catchment should be a ‘no go zone’ to fracking, says the Town Council.

A push to get the NT Government to declare all Territory public drinking water areas as no go zones for fracking was unanimously supported by the Town Council last night.

The motion, moved by Councillor Jimmy Cocking, will now go to the November meeting of the Local Government Association of the NT (LGANT) for further debate.

At present, extraordinarily, the Alice Springs water control district, among others, is not so declared under the NT Petroleum Act.

Cr Cocking’s other motion that he hoped would go to LGANT, calling on the NT and Federal Governments to declare a climate emergency, did not fare so well, to the disappointment of a full public gallery. 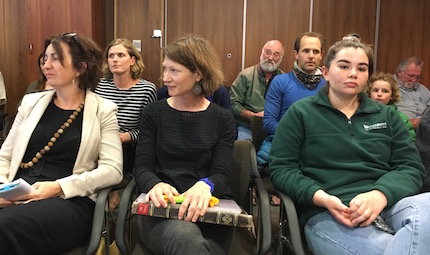 Representing their views, judging by the applause, local resident Elliat Rich, during public question time, made an impassioned plea for council to join a movement that is gathering international momentum.

Right: Elliat Rich (middle) in the public gallery after her speech last night.

Close to 1000 jurisdictions around the world have declared a climate emergency, almost all of them this year, she said.

(The very first municipality to male the declaration was the suburban council of Darebin in Melbourne in December 2016. According to the Climate Emergency Declaration site, at latest count 967 jurisdictions in 18 countries have followed:

In Australia 38 jurisdictions, including Melbourne, Sydney and Hobart City Councils and the ACT Government, have declared a climate emergency. Between the 38, they represent 3.7 million people, 14.7 per cent of the national population.)

Ms Rich congratulated council on its climate action plan but urged them to go further. Life might seem reasonably normal now, but record heatwaves and the wildfires of last summer are among the many signals of the gathering emergency.

More people have been citing climate change as a reason for leaving Alice Springs, she said, and this trend  is unlikely to change unless there is action to “future proof” the town. 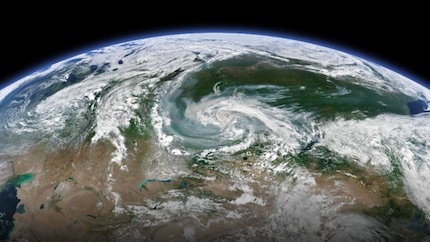 The second part of Cr Cocking’s emergency declaration motion was about getting LGANT to establish and resource a working group to support local councils to develop and implement their climate emergency plans.

Left: The global climate emergency has seen unprecedented wildfires in the Arctic this summer, with NASA satellites observing a vortex of smoke  over Siberia after weeks of burning. Source: Forbes.

He described the Territory as “exceptionally vulnerable” to the impacts of climate change: rising sea levels and fierce cyclones in the Top End, heat waves in The Centre.

The NT Government has no climate action plan, he said, although he is hopeful that Emergency  Services will act on putting heat wave plans in place.

Darwin City Council has both a climate action plan and has declared a climate emergency (this was just last month).

Alice Springs Town Council, as one of the leading councils in the NT, should do the same.

He quoted Swedish teenage activist Greta Thunberg’s call to arms, that our house – the earth –  is on fire, which it is quite literally at the moment, in the Amazon and in the Arctic.

The Australian Local Government Association in June recognised the climate emergency (supporting a motion to call on the federal government to make the declaration). The LGANT meeting in November would give NT regional councils the opportunity to debate the issues and Cr Cocking called on his colleagues to support having that happen. 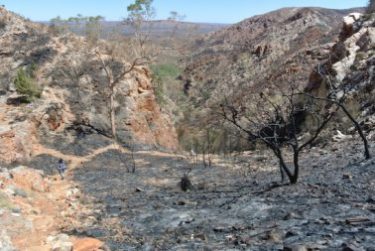 Applause from the public gallery.

He was “disappointed” that Cr Cocking hadn’t “studied” LGANT policies, which include its support for every council to address climate change in their own strategic planning.

He said LGANT couldn’t be “prescriptive” in this area; some councils don’t have the energy or the finances to follow through on this, unlike “affluent councils” such as the Alice one.

Cr Eli Melky spoke in favour of the motion – adding council’s voice to other voices would “begin to roar” on this important issue.

It was then put to a vote which was split, four: four.

Mayor Ryan suggested that the motion be brought back to the next round of council meetings for further discussion. This would put it beyond the possibility of being discussed at the November meeting of LGANT, as notice of all motions is due this month. The next LGANT meeting would not be for six months (emergency, what emergency?).

Cr Melky urged him to exercise his casting vote. It was clear though that he would vote against the motion (convention is that the casting vote supports the status quo).

Mayor Ryan suggested he was “offering a hand of peace” with his proposal to discuss it further. If he used his casting vote, the motion would be off the table for three months.

His “hand of peace” became a “hand of friendship” that would work with Cr Cocking in the coming weeks to get his motion “to match current [LGANT] policies”.

Cr Cocking had little choice but to accept, which he did graciously.