Aboriginal flag to fly year round on Anzac Hill 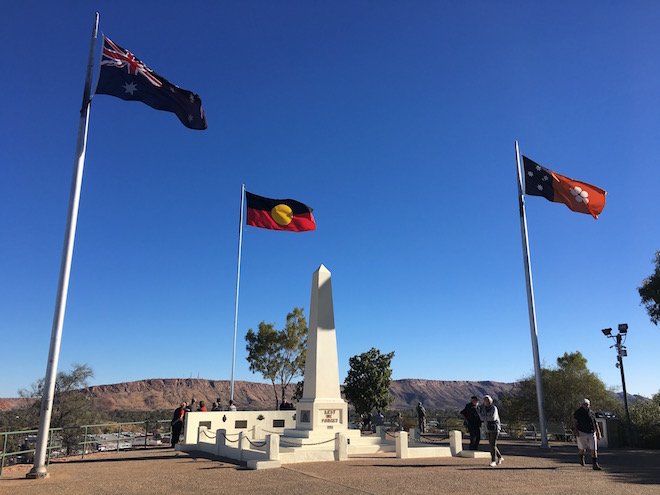 Above: The Aboriginal flag on Anzac Hill in during NAIDOC week in July 2018. Photo from our archive.


The Town Council  last night voted unanimously to have the Aboriginal flag  fly year round on Anzac Hill.

The exception will be Anzac Day, when the New Zealand flag will fly alongside the Australian flag.

Cr Satour has led the push during this term of council for the flag to fly on Anzac Hill.

Last year she was able to win council support for it to be flown on days of significance to Aboriginal people (National Sorry Day, National Reconciliation week and NAIDOC week). Following the flag-raising during NAIDOC week this year momentum has built in the community for the flag to fly year round.

Cr Satour’s original motion included the exceptions of Anzac Day and Remembrance Day. Having looked into it  further, she proposed amendments last night to remove those stated exceptions, leaving in reference only to the national flag protocols.

The protocols, according to Cr Jimmy Cocking, do not go to these exceptions. Lowering the flag on Anzac Day to make way for the NZ flag respects widespread practice. The only practice for Remembrance Day is that all flags go to half mast, he said.

In a second part to her motion Cr Satour asked for a report to come to council about flying the Torres Strait Islands (TSI) flag on the hill, as well as a report on council’s policy for flying flags at the Civic Centre (the relevance of this became clear later).

In a curious attempt to wrest initiative on the issue, Mayor Damien Ryan proposed an addendum to her amended motion, that the TSI flag also be allowed to fly on the hill forthwith.

Both he and Cr Jamie de Brenni said that many people in the community had spoken to them about having the TSI flag on the hill as well.

Mayor Ryan said that it would start the “journey to reconciliation”.

Cr de Brenni said he thought the community would embrace the move and didn’t think there would be any complaints.

Cr Satour (at left, speaking to her motion) suggested that he did not know that.

He replied that he hoped there wouldn’t be, as they’re “First Nations “ too.

However, the First Nations woman sitting across the chamber, Cr Satour, quietly insisted on her motion being to put to the vote as is.

Local Aboriginal people, and specifically the custodians of Mparntwe, have waited a long time – 20 years – for this gesture of respect. There would be time for considering whether to extend it to the TSI flag, or how to do that meaningfully.

The chairing of the meeting got messy at this point, interrupted for the second time in the evening  by a tussle with local resident Eden Baxter over him taking photographs and video-recording the meeting. Although Mr Baxter, who has a radio show on 8CCC, has done as much on numerous occasions, this has lately become a source of irritation for the Mayor.

A show of hands indicated that the Mayor’s addendum would fail, with only him, Cr de Brenni and Cr Glen Auricht in favour. Cr Jacinta Price, who on past performance on this issue might have been expected to support them, was absent from the meeting. Cr Matt Paterson, who often votes with this bloc, was hesitating. Last year he provided the circuit breaker that led to the first breakthrough on the flag issue.

Cr Marli Banks unexpectedly had to leave the meeting, due to a family emergency, and the Mayor called a 10-minute break.

When the meeting resumed, the vote on the Mayor’s addendum was called a second time. Cr Paterson voted against.

The Mayor called for a division, which will record in the meeting minutes that he and Crs de Brenni and Auricht were in favour.

The addendum having failed, Cr Satour’s amended motion was put and unanimously supported.

There were murmurs of congratulations to her.

Mayor Ryan said with pique that congratulations should go to the whole council, that it was a bit surprising the division this had caused.