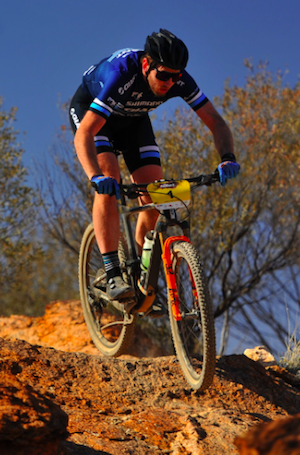 Paul Van der Ploeg (at left) claimed his fifth stage win of the 2019 Redback and overall Redback Crown, smashing the course record by four minutes, coming home in a tick over two hours.

It was an emotional victory for the “Van Man” after he broke his femur bone earlier in the year riding in New Zealand.

Despite winning five of the six stages, the racing has been close all week with Paul fending off Rohin Adams plus local NT boys Henry Hackett, Owen Chenhall and Oliver Hartung. Hackett and Adams both came in under the course record and placed 2nd and 3rd, respectively.

The Redback was first held in 2008 and every year since. It was formerly known as the Ingkerreke Commercial MTB Enduro. 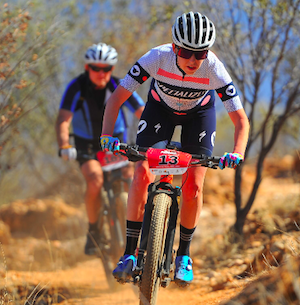 The event hosts riders all the way down the chain from recreational to elite, road cyclists, runners, triathletes, adventure racers, ironmen, locals, first-timers and returning riders. The race is designed to be fun and achievable for riders of all abilities.

All races start and finish within rolling distance of Alice Springs and the Mercure Hotel. Riders have no need for a support crew or hire car and stay in one hotel for the entire event.