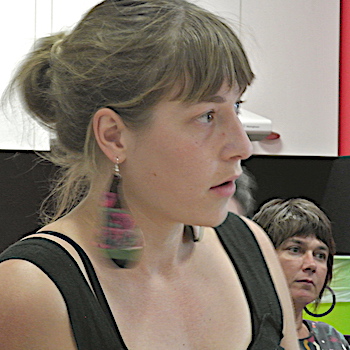 If the already dangerously complex issues of youth offending can be fairly dealt by leaving out half the facts, then Alice Springs youth lawyer Sophie Trevitt (pictured at left at a public meeting on youth issues) has done a fine job with her opinion piece in yesterday’s The Guardian.

The story convinces us beyond reasonable doubt that she has “fierce, protective feelings” for her clients and then asserts that they are being “tortured,” that the recently refurbished juvenile detention facility – the Juvie – at a cost of several million dollars is “hell”.

She tells us little about youth crime or the circumstances of the young people involved.

Ms Trevitt, who works for the publicly funded Aboriginal Legal Aid, as a lawyer practicing in the field, has an excellent opportunity to have an informed opinion.

Instead she presents to a national readership a story that makes no reference to the offences for which the children are in collision with the law: Break-ins, car thefts, ram-raids of shops, vandalism, highly dangerous illegal driving, torching vehicles, rock throwing which – miraculously – has not yet led to fatalities.

Nor does she present any propositions for solutions of a problem which most people regard as the town’s gravest, which has driven people to leave and contributed to the downward spiral of the tourism industry.

Ms Trevitt some time ago did not grant an interview request from the Alice Springs News – possibly because it’s easier to present her views to an audience that doesn’t know the facts and their background.

The News has covered these issues extensively. This has included pieces offering insight into young people’s circumstances and being specific about some solutions, putting the obvious distress the young people experience into context.

Ms Trevitt’s factual errors are as troubling as the omissions.

The Juvie is “not far out of town, but it’s far enough away to be deliberate,” she writes.

This goes to trying to keep parents away from their detained children: “One boy missed his mum so much his call log shows him making over 100 calls in a month, but her phone doesn’t always work and she also has no car to visit.” 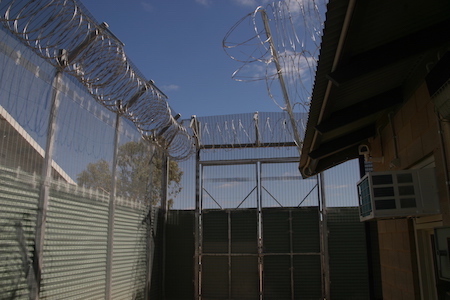 And: “Mothers without cars can’t get to the in-between place 22km out of town; how are they going to reach their kids when they’re 1,500km away [at Don Dale in Darwin]?”

And: “His mum doesn’t have a car so she hasn’t been able to visit. He misses her.”

Of course any involuntary transfer to Don Dale in Darwin will make visits for most families in Central Australia impossible and  is therefore an outrage.

But the fact is that the Prison Fellowship, under the leadership of the legendary Enid Harland, runs a bus shuttle from the town centre on weekends, with volunteer drivers [including the writer], asking for a $10 donation for a return trip to the Juvie and the adult prison, kids travelling free of charge.

This leaves open the suggestion that the “kids” next door are under the same conditions, with Ms Trevitt neglecting to mention that their rooms are air conditioned, and undergoing – or having undergone – substantial upgrading by the current government, under the auspices of the Families Minister Dale Wakefield, not Corrections. (PHOTO above right: Each room has an air conditioner like the one pictured.)

We asked Territory Families about the rooms today. This is what a spokesperson said, information that would no doubt have been available to Ms Trevitt as well: “Works at the Alice Springs Youth Detention Centre will maintain a mixture of single and double rooms. The overall capacity of the centre is not changing.

“This will enable young people from the same family groups to be able to share where appropriate while accommodating other young people who have complex needs or require their own space.

“Having improved accommodation and infrastructure will enable us to implement the delivery of a behavioural management model which sees young people accommodated and rewarded as a result of their behaviour.”

Ms Wakefield set out to change the nature of the facility, aiming to make it less like a prison. The results were serial break-outs, leading one local wit to suggest a revolving door with a taxi rank outside. The razor wires went up again.

“I know what he [one for Ms Trevitt’s clients] means when he tells me that spending days in a cell with nothing to do and no one to talk to makes him hot behind the eyes. It makes me hot behind the eyes to hear him say it,” she writes.

The facts, as presented to journalists by Minister Wakefield in May, are that Juvie has a classroom where attending lessons is mandatory (had Ms Trevitt checked what the truancy rates are outside the Juvie?), and a teaching kitchen with everything that open and shuts.

But Ms Trevitt’s most serious omission is her failure to examine the role of parents, or rather, their neglectfulness.

She quotes an unnamed woman: “She tells me that the grandmas are trying to organise visits with the kids in detention. She’s been speaking with local politicians. I saw her at a rally not long back talking about bringing these kids home and keeping them close.

“But we don’t let them keep these kids close.”

She is clearly referring to the Grannies who are every bit as concerned about parental neglect as they are with government strategies.

But are they making headway with the multitude of parents who are failing to “provide the necessities of life” to their offspring.

And that is an offence that Ms Trevitt, as a lawyer, may like to investigate, given that it is routinely ignored by the law enforcers.