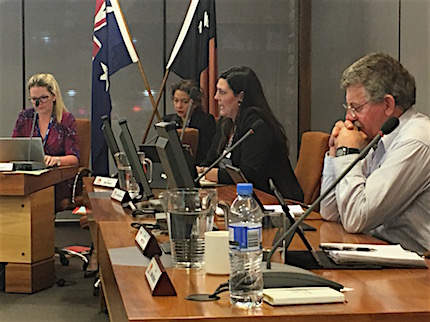 Councillor Marli Banks says there have been no authorised decisions by the Town Council about leaving its present civic centre site to make room for the proposed national Aboriginal art gallery.

And she says nothing should happen before the Town Council, in its own right, seeks the views of the Mparntwe custodians.

Cr Banks (pictured in the centre of the photo) was contradicting a statement made in Parliament yesterday by Chief Minister Michael Gunner in response to a question from Independent Member for Araluen Robyn Lambley.

Ms Lambley said “it has been three years and still we have no site for [the gallery] … despite spending over $1m in consultancy fees … you have failed to secure a site … we hear that negotiations … have broken down” with the Town Council.

Mr Gunner replied that Ms Lambley’s information “is contrary to all formal correspondence, all formal meetings and all formal decisions by the Alice Springs Town Council”.

Cr Banks says there is a clear protocol for Town Council for making decisions: A matter is discussed in council meetings when all nine elected members have an opportunity of being heard.

A motion is then moved and if carried by a majority it becomes the decision or the policy of the council.

None of that has taken place in the issue of location for the gallery: “There is correspondence between the council and the government but we’re not really having discussions.”

She says if there are discussions “I am not privy to them. When we raise this with the CEO and the Mayor we’re getting the same answer – we are still waiting for answers to our correspondence.”

Cr Banks says the matter is being dealt with in confidential council meetings despite demands from her and Cr Eli Melky to deal with the issues in meetings open to the public.

“It is important business and it is in the public interest,” says Cr Banks.

“I am dissatisfied with the government’s approach to me as an elected council member.

“If they are meeting with individuals and that allows them to stand up confidently in Question Time and say we are having good conversations, then that demonstrated their lack of understanding of how local government works. Official business has an official process.

“My point is, who is Mr Gunner having these conversations with? We have not sat in a room with the Chief Minister, we’ve been on a teleconference with him once. It falls short.”

Cr Banks says any council decision must follow consultation with appropriate traditional leaders, including the question where the gallery should be – north or south of The Gap.

Significant Aboriginal figures have ruled out north of The Gap where the government is proposing the location – again.

“The Mparntwe custodians are a very clearly defined group. They have the authority and the native title rights,” says Cr Banks.

“I continually advocate to the council to begin conversation with them in our own right, on how to move forward. We need to build these relationships.

“We have not even put forward a request for talks with them as a group.”