Home Issue 14 US military base in Darwin: what risk to NT?
Issue 14Issue 15Volume 25

US military base in Darwin: what risk to NT? 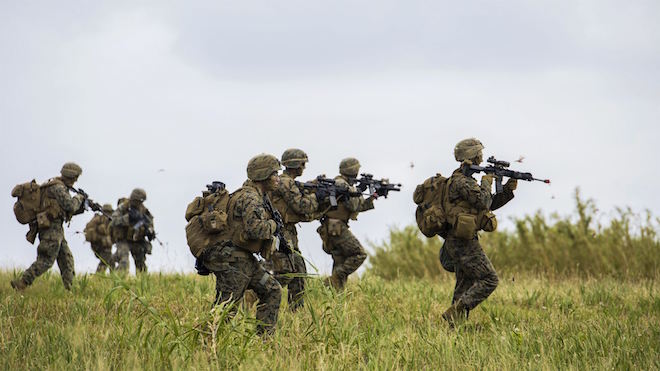 Above: US Marines in an assault exercise on Le Shima Island, Japan, in March 2017. A similar exercise took place earlier this year. Marine Corps photo by Lance Cpl. Charles Plouffe.

The Agreement between the Governments of the United States and Australia which underpins the stationing of up to 2,500 US Marines in Darwin is called the Force Posture Agreement (FPA). The concept was first announced by US President Obama in 2011 in a visit to Australia and was presented as part of the new US military strategy called the “Pivot to Asia”. A clearer explanation of this strategy would be “the relocation of a major part of the US military forces including naval forces to the Asia/Pacific area to confront and contain China”.

Our politicians in Canberra, including the then Prime Minister Gillard, gave him a round of applause when he made this announcement.

The Agreement was signed in 2014 and operates for 25 years, unless terminated by either side giving a year’s notice. Whilst the stationing of US troops in Darwin is the more visible expression of the FPA it also includes:

•Giving the United States airforce unimpeded access to Australia’s airfields and facilities for their fighters and bombers as well as seaports for their naval vessels.

•Giving the United States military and its contractors access to and use of  “agreed facilities” for training, transit, support and related military activities such as refuelling of aircraft, bunkering of vessels, temporary maintenance of vehicles, vessels and aircraft, temporary accommodation of personnel; pre-positioning of communications equipment, supplies, fuel, ordinance and materials and deploying forces and materials as the parties may agree.

One could infer that, in reality, this FPA has enabled the United States to set up Australia as its southern military base for operations in the Asia/Pacific area.

One could be forgiven for thinking that Australia must be in a state of war, even though the last Defence White Paper made the point no less than three times that no military threat to Australia could be identified in the foreseeable future.

Yet we have this FPA with the US with its foreign troops annually stationed in Darwin, defence expenditures raised to 2% of the GDP ($200 billion over the next 5 years) with pressure from some military/industry quarters to raise this percentage even higher.

Peace groups including the Independent and Peaceful Australia Network (IPAN) have asked successive defence ministers to explain the purpose and role of the US Marines in Darwin and indeed the FPA. The answers are vague, refer to the ANZUS Alliance, mention joint training exercises and improving the interoperability of the US and Australian Forces. But the FPA has nothing to do with the ANZUS Treaty which simply requires both parties to consult if either party is threatened in the Pacific area. The FPA is a new and significant escalation of the military relationship between Australia and the US  – a stronger “joining at the hip” so to speak.

One indicator of current US military strategy in utilising their Marines was made evident this year when US Marines in a “training exercise” landed, invaded and captured an island off the coast of Okinawa called Le Shima.

Alex Lockie of the Business Insider (29/1/19) said of their activity: “The U.S. Marine Corps is developing a new concept of naval warfare to allow Marines to take South China Sea islands from Beijing in the context of a massive missile fight in the Pacific.”

“The new military strategy, known as Expeditionary Advanced Base (EAB) Operations, will allow Marine units to seize, establish, and operate multiple small bases across the Pacific Ocean, a tactic that will be beneficial in a high-end fight with China.”

One might ask whether this recent war exercise of the US marines throws some light on why US Marines are now being embedded on Australian Naval ships such as the HMAS Adelaide which has been fitted with amphibious landing gear.

“Every effort should be made to keep Australia out of yet another US war overseas and especially against China, our major trading partner. In such a war scenario the US marines operating out of Darwin would also draw fire, perhaps missiles on the Northern Territory. We need, for our own peace and security, to see an end to the stationing of US marines in Darwin and end these war exercises with the United States.”

The US Marines’ chain of command rests at the top with the recently formed US Indo-Pacific Command, established in June 2018. The area under its “responsibility” embraces Australia, New Zealand, the Pacific Islands, Japan, The Philippines, Guam, and ambitiously, China, and the South China Sea, India, Vietnam, Thailand, Malaysia and Indonesia. It is still not clear whether the Australian Government can veto US Marine activities operating from, or out of Darwin.

Against this background of the US Pivot to Asia, US confrontation with and containment of China, training to capture Islands in the South China Sea and determination to maintain its hegemony in the Asia/Pacific area, the stationing of US Marines in Darwin and implementation of the Force Posture Agreement no longer appears as a benign inter-forces training operation designed “to assist in humanitarian emergencies”.

Peter Hartcher, writing in The Age (5/3/19) reminded us that: “North Korea publicly painted a nuclear target on Australia in April 2017. Kim Jong-un’s government seized on the fact that a contingent of US marines is now in a permanent, rotating deployment in the Northern Territory.”

Australian involvement in a US-led “coalition” in hostilities against China with US Marines operating from Darwin and embedded on Australian naval vessels could well draw fire from China. And Chinese missiles can reach all parts of Australia including Pine Gap, the North West Cape and Darwin.

A reasonable conclusion would be that the US Marines stationed in Darwin and the FPA do indeed draw Australia into dangerous waters and are a risk to our peace and security.

Note: Bevan Ramsden is a member of the coordinating committee of  Independent and Peaceful Australia Network (IPAN) which is organising a national public conference in Darwin, 2-4 August 2019 with a focus on the US Marines in Darwin and under the conference banner of “Australia at the crossroads- time for an independent foreign policy”.