Town under pressure from visitor boom

Above: Ilparpa claypans after rain. People illegally camping there are having an impact on enjoyment of the beauty spot and its wildlife, says Cr Jimmy Cocking. Photo from our archive ( February 2015).

Alice Springs is full, at least for people travelling with caravans and mobile homes, and the industry is expecting this double-edged boom to hit a new high in the next school holidays.

On the up side, all the economic benefits that flow from the influx, but there are some downsides which were discussed at last night’s Town Council meeting.

Councillor Jimmy Cocking raised the problem of “illegal camping” at the Ilparpa playpens (above), where apparently people were told they could go when the local caravan parks were fully booked.

Increased traffic on Ilparpa Road had also resulted in increased road kill, he said: a local resident had told him that eight kangaroos had been hit in recent weeks.

Cr Marli Banks, who lives in the area, had also observed that the carcasses had been torched.

As well, she had noticed people camping at the old quarry site on Ilparpa Road and she had been contacted by a visitor, travelling in a caravan with a sick child, who couldn’t afford to pay $70 for room. The showgrounds were not an option during the lead-up and wind-down from Show weekend.

The increase of visitors was great, said Cr Banks, especially as tourism is the biggest (private sector) contributor to the economy, but the numbers are testing the town’s capacity. 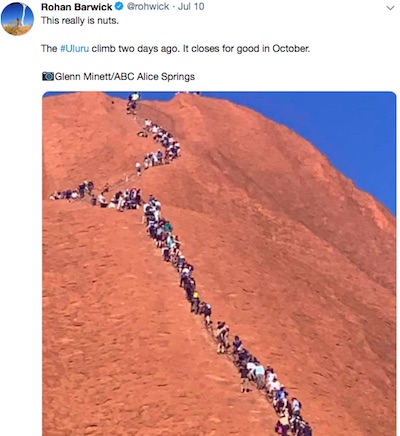 Anecdotally the influx is due to the anticipated closure of the Uluru climb in October, which is why a further rush is expected in the September holidays.

Mayor Damien Ryan reported a comment from a meeting of Tourism Central Australia, that the holidays we have just had were “a dress rehearsal” for September.

Outgoing CEO Rex Mooney said he would raise the issue today with the regional director of the Department of Infrastructure, Planning and Lands.

Cr Banks said the government has known that the closing of the Rock climb would put pressure on infrastructure in the Centre but how to manage that hadn’t been addressed.

Cr Glen Auricht  noted that the Red Centre Nats, coming up in four weeks, would add further pressure in town.

Cr Cocking suggested exploring the possibility of a shuttle bus running continuously from the  caravan parks into town, to reduce the impact on car parking in the town centre.

Cr Jamie de Brenni said NT Major Events and the Red Centre Nats organisers should be involved in the discussions.

Cr Banks said tourism businesses should also be contacted, to see what they think their needs are.

Cr Banks wants council to think about its role in relation to “youth crime”.

She was  “blown away” during a recent visit to Todd Mall by the numbers of youths “moving in large blocks” – what would be “perceived as gangs” – and being “herded along” by police.

On another occasion she saw a group of young people on Gregory Terrace, running full tilt, with an attack dog in full pursuit and “gnashing jaws”. This was about 9pm on a week night. As a member of the public she found the sight “pretty full on”.

She thought it would be important for council to engage with other tiers of government on the issues, through the Chief Minister’s Department and the Department of Prime Minister and Cabinet.

She noted the recent announcement by the NT Government of the final piece in their seven step Breaking the Cycle plan for Alice Springs.

This is an Aboriginal-led Youth Outreach Service, called “Looking After the Kids – Walking Together with Young People” and will be operated by Tangentyere Council.

Cr Banks noted that council’s committee for liaison with  Tangentyere Council has yet to have a meeting and asked “at a minimum” for the CEO to contact Tangentyere, to get those meetings to happen.

No-one in council has yet had a briefing from government on the implementation of their seven-step plan.

Self-drive at record numbers, but there are risks