Home Issue 14 Making electricity is easy. Transporting it is not.
Issue 14Volume 25

Making electricity is easy. Transporting it is not. 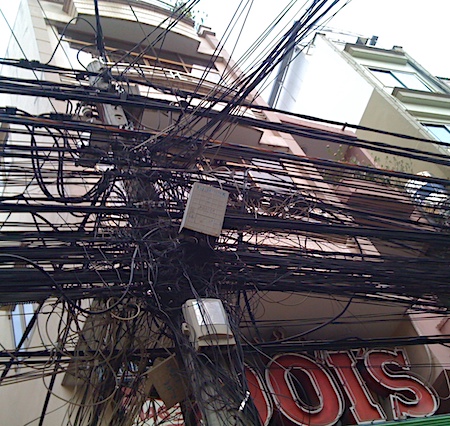 They have their wires crossed – that’s the wires that take electricity around town: RePower Alice Springs, the community organisation promoting renewable energy, and the NT Government-owned Power Water Corporation (PWC) have reached an impasse over ways to provide privately generated power.

Right: If regulation of electrical reticulation in Ho Chi Minh City seems inadequate, ours is over the top.

RePower is working on arranging clusters of homes with solar equipment to share the use of the power of the sun, and co-own a battery.

Trouble is, PWC has the monopoly on the wires between the homes, and PWC isn’t playing ball, says RePower spokesman Tim Brand.

He’s been trying to get sense out of PWC’s Remote Services division: “To date we got absolutely zero back from them, which is nowhere near acceptable. Over the next month we’ll try to find out why. It is anti-competitive, anti-commercial.”

Mr Brand says to be allowed to have its own wires, RePower would have to register as an electricity provider and go under the rules of the national electricity market, which is not a feasible solution for a small community group.

“A lot of work and money would be involved” and if not enough people sign up to it, the organisation would lose big time: “It would be a very big commercial risk.

“It is very expensive to set yourself up under all these rules.

“A private person is not allowed to run an extension cable from one house to another house.

“In the NT the only person registered to do that is Power and Water. You can do it but it would cost you millions just to run one cable.”

So for better or worse, the group is shackled to PWC for the wire systems between the participants in each “solar farm” in town.

The irony is that remote communities can own and use the wires they need for the power they generate for themselves.

There is a way ‘round the problem, but it’s a long way down the track, technologically and financially: Hydrogen.

This solution was detailed in a recent report from Beyond Zero Emissions, which outlines the economic feasibility for cheaper power and a higher degree of economic development throughout the Territory if solar, battery and hydrogen fuel cells were combined.

There is nothing stopping a householder from making hydrogen and selling it to her neighbour or neighbouring community who can turn it back into electricity: No wires needed – and no batteries.

Excess power can be stored as hydrogen.

But there is a flipside: If you use gas or diesel to make hydrogen you have to buy it. If you use solar power it’s free and its supply is almost unlimited.

“I’m not convinced the technology is price competitive right now. You don’t need a battery but what you do need is a generator, and generators are not as good at creating electricity as solar panels are.”

The abundant supply of sunshine, especially in The Centre, creates a compelling argument for solar power.

“When we talk about 100% renewables for Alice Springs we mean 120% which would mean the excess would account for degrading solar panels and losses on lines,” says Mr Brand.

Those losses would be further minimised by decentralised generation, that means the power is used close to where it is generated, minimising losses in transmission.

There would be a need for a small gas generator to back up “if we get three weeks of rain” – with a concurrent reduction of consumption. Rain is rarely accompanied by excessive heat which requires power-hungry air conditioning.

• Power and Water has previously engaged with RePower and continues to support all customers and proponents in achieving their outcomes through connection to the electricity network in a safe and reliable manner.

• Power and Water is committed to giving customers our best and continue to explore opportunities to maximise the value of the electricity network to our customers and the community.

• There is no current commercial or market arrangements that support direct peer–to–peer trading arrangements as outlined in the article however residential customers currently have the opportunity to sell their excess solar for use by others also connected to the network. While this can occur within certain parameters and conditions, electricity producers can receive payment for the excess power via a Feed-in-Tariff.

• Power and Water is not responsible for the network registration, licencing, economic or safety regulation of third parties in the Northern Territory.

• Power and Water has a responsibility in the provision of electricity network operations in Alice Springs and provides network services within agreed parameters for safety, reliability and technical performance.

• Power and Water is licenced to operate by the Northern Territory Utilities Commission under the Electricity Reform Act and regulated by the Australian Energy Regulator (AER) that operates under the Competition and Consumer Act.