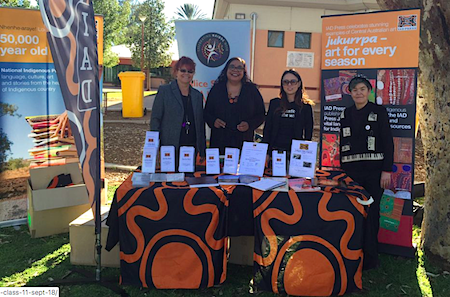 As the world is celebrating the International Year of Indigenous Languages the standard bearer of traditional tongues in The Centre has been placed under external administration.

The Institute for Aboriginal Development (IAD), nearly half a century old, is insolvent with liabilities of more than half a million dollars and has been ordered by the Federal Court to have its second creditors’ meeting before the end of this month.

PHOTO from the IAD website: IAD Press is a noted publishing house. The News is seeking information about how it may be impacted by the current developments.

Since May the organisation has been under the administration of Brisbane firm Grant Thornton Australia Ltd.

The signatures on the court documents read like a Who Is Who of prominent local Aboriginal people: Brenda Shields, Deborah Booker, Pat Ansell-Dodds, Steven Satour, Benedict Stevens, and Braydon Kanjira.

The minutes of an IAD meeting on May 17 sketch the decline of the organisation founded by the Uniting Church in 1969 “to assist in community development for Aboriginal people in Central Australia and to provide cross cultural education”.

It was “developed as an education provider, training organisation, language and resource centre … producing culture, language and other related materials.

“Around 2010 government programme funding began to cease, with the emphasis being on self-sufficiency.”

There were “trading losses in recent years, as operations and staff number have declined and there has been high management turnover.

“With insufficient cash flow, IAD has ended up with unpaid debts, limited cash but still has substantial property assets.”

It is noted that there were “many attempts to implement change, but there had been no follow through or implementation by senior management or directors in some instances”.

Sale of portions of the land in South Terrace have been mooted.