Home Issue 14 Money tight, rainfall low, but the Show sure did go on
Issue 14Volume 25

Money tight, rainfall low, but the Show sure did go on 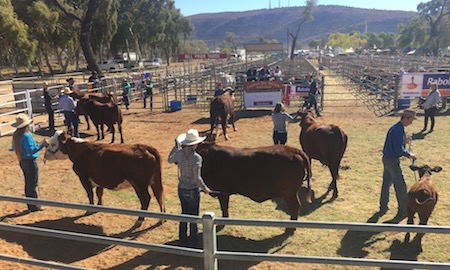 The annual Show has turned 60 but it hasn’t changed a lot in the past few years, decades really, and that’s a sure sign of perfection.

If any proof is required, the crowd is usually around 20,000, which is around 80% of the town’s population.

This is where you go to catch up with the people you haven’t seen all year – but we’ve said this before, of course.

So what IS different this time?

The sideshow alley is bigger, five more rides than last year and the crowd, huge, especially yesterday: Thousands of people, mostly Aboriginal and young, are braving the rides – or watching them, because money is tight, according to veteran showman Phillip Zacchini.

His family has brought food stalls and rides, such as the ghost train, to Alice for 30 years. 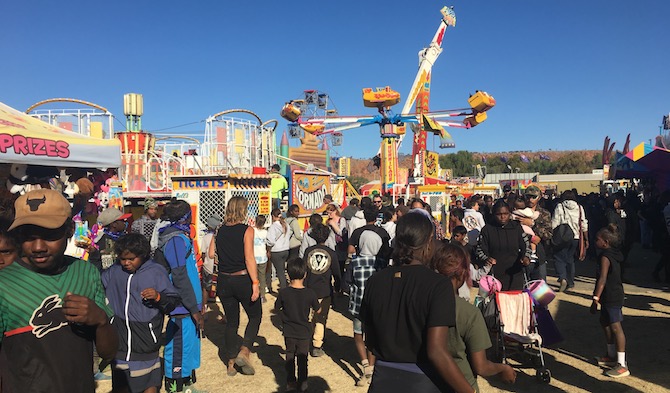 He says while interest is high money is short, after the fireworks and the Finke. Gone are the days when the Show was the biggest show in town. 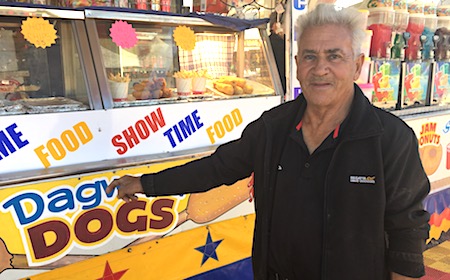 Where is Mr Zacchini (pictured) from? “Everywhere.” He and his family spend their lives on the road or at show grounds.

He says showmen from down south like coming to The Alice in winter: The weather is much better. From here they do the Territory show circuit and after Darwin they’re off to Mt Isa.

But the Show’s main game is animals, and that’s means especially cattle and dogs.

The cattle industry in The Centre, the reason for starting the Show, is going through one of its lows – a drought.

The stations are de-stocking, there are just 100 head in the yards for the Show instead of around 130.

There was no bull sale because what’s the point of buying a bull if you haven’t got any grass to breed on.

But the cattle people (above) are resilient: They’re showing off their best beasts, and the young generation is displaying no signs of giving in to the elements.

Sheri Fogarty, from Palmer Valley station and secretary of the Central Australian Beef Breeders Association, is far from pessimistic.

She says 3900 head were knocked down to about 10 registered buyers at the pre-Show auction, with the highest price paid at $3.22/ kg live weight for Angas Cross steers sold by Alan and Jo Fogarty of Lucy Creek station.

And of course, the beef from The Centre is organic, in its best sense – the animals are roaming free all their lives.

Climate change, presumably, is making raising cattle a lottery: Lucy Creek and neighbour Ammaroo received rain from Cyclone Trevor. Not much for the rest in the million square kilometres of Central Australia.

Judging a beast is an art – and judge Bec Skene, from Queensland, explains how it’s done:


Some of the major prizes won for cattle:

And the human winners were the budding cattlemen and women:

Just next-door to the big animals, the smaller ones were put thought their paces (as were their owners). Judge Jenny Whitney, from NSW, explains what it takes to earn a ribbon.