Man's Best Friend is not the council's 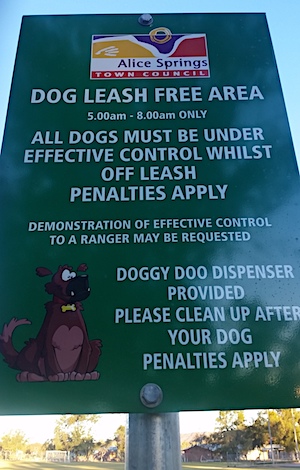 Sir – I’m writing to express my dismay (and the dismay of many others) at the recent placement of signage on Ross Park ovals setting restrictions on dogs being off-leash.

I’m not aware if any formal restrictions were in operation previously. Certainly signage did not indicate this to be case. And I am not aware if this signage has now been placed in other parks.

Also I have been on the park with my dog off-lead when speaking to rangers who were there to take a stray dog. Nothing was said to indicate that my dog being off-lead was against any regulations.

For the past five years, dogs and owners have been gathering at the far western end of the park at the end of the day (generally after 5.30pm).

The dogs have been running and playing, and the owners have been chatting. At times there have been up to 15 or 20 dogs enjoying this freedom as part of this informal dog club. On some nights up to 30 dogs (including dogs on other sections of the oval) have been running free on the Ross Park oval.

During this time, on some weekdays, junior sport also takes place.

For five years or longer, these two park activities have co-existed without any friction or incidents that I am aware of.

As an informal group, we have been very conscious of the junior sports and the space they need, and have always kept to the far end of the park, and even moved closer to the end fence when necessary.

So we are mystified about what has now prompted this implementation of new restrictions on dogs.

The nature of the limitations seems to suggest that it has something to do with dogs not being compatible with another park use – namely junior sport.

I arrive at this conclusion because the signs permit dogs to be off-leash between 5am and 8am.

The sign also says to clean up after your dog. I am not sure whether this is the bigger grievance behind the restrictions.

We would like ASTC to recognise that owners allowing their dogs to run free in parks should be seen as a legitimate and healthy activity, alongside other activities that are catered for in the town. We would like those responsible for these changes to come down to Ross Park and see how this activity can co-exist with other park uses.

I am not aware of this happening before the signage was erected. We would like to know why these changes have been made.

Ross Park is an ideal place for dogs to be off-leash. It is a very large park with fencing in place to keep dogs off the road and away from pedestrians. It has been used for a long time in this way. And it was co-existed with other park activities in a harmonious way over that time.

I understand that some people have fear of dogs, and that there is always the possibility of a dog being unpredictable.

If this is the reasons for the changes (as suggested by the 5am to 8am rule), then I still do not see the need for this blanket ban over the rest of the day.

Junior sport does not take place every afternoon, and when it does, it is always finished by 6pm. Of course then there are the school holidays and weekends when the dog owners are virtually the only people on the park after 5pm (or even earlier).

Just last night at 5.45pm I counted 21 people with their dogs running off-leash at the western end of the park. On the eastern side close to Winnecke Ave, two men were kicking a soccer ball.

In my mind it seems that this decision has been rushed – not sure why – without being used as an opportunity for the Alice Springs Town Council to come up with better policy to cater for the activity of dogs owners having adequate access to space for their dogs to be off-leash.

If there are genuine concerns about dogs and junior sport sharing the same space on Ross Park, then this could easily be accommodated by extending the time that dogs can be off-leash to include after 6pm. All junior sport finishes by this time. And a further change might be for the restrictions to only apply during school weeks – similar to school zone traffic laws.

Once it was not legal to cycle on footpaths. The fear was bikes couldn’t co-exist with pedestrians.

It has been proven that obviously they can. And the outdated thinking behind the old regulations was proved to be just that.

I think with some creative planning we can also show that the activity of dogs being off-leash and that of other park users can also co-exist – to everyone’s benefit.

ED – The Alice Springs News is seeking comment from the council.

Regarding the signage referred to in Mr Bermingham’s letter, two have been in place for some time, located at the entrance to the Ross Park Oval carpark and at the Ross Park Primary School end of Harvey Place, near McKay Street.

Additional signs have recently been installed by Council at the entrance to Harvey Place off Undoolya Road, Winneke Avenue, and the long driveway to the tennis courts.

Council’s policy is to ensure the safety of players involved in sporting activities on Council’s ovals and grounds and, as such, off-leash dog exercise times are restricted at those locations.

Frances Smith Memorial Park in East Side is a leash-free dog exercise area, mornings and afternoons only.