A songman for his place and time 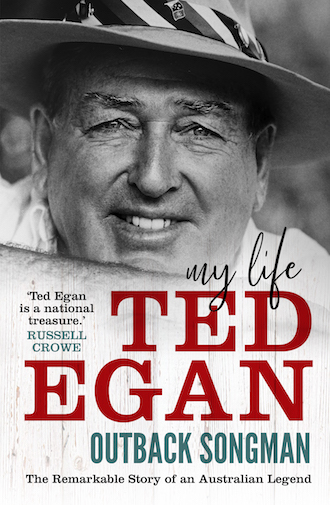 Ted Egan AO is a prolific writer among his other accomplishments, incredible not only for their number but their range. It is not yet two years since he published his study of John Anderson Gilruth, first Commonwealth Administrator on the Northern Territory. Now a new memoir looks back over the whole of his life, with a particular focus on his singer-songwriter career. In this extract he tells the story behind one of his most famous songs, ‘Gurindji Blues’.

Extract from Outback Songman by Ted Egan, Allen and Unwin – Out Now

The two major land-rights groups were the Gurindji of Wave Hill, led by Vincent Lingiari and the Yolngu of Arnhem Land. My song brought them together, and they remain united to this day in their ongoing quest for justice.

When we recorded ‘Gurindji Blues’ in October 1969, I asked Vincent to provide a spoken introduction. This is what he chose to say: ‘My name Vincent Lingiari, come from Daguragu, Wattie Creek Station. Yalangulu yanana Wattie Creek ngulung murayani. Mula ngura ngurayani jaragabgu, jangagani gadiyawu. Mula ngura yangana milanga jaragabgu.’ He continued in English: ‘That mean that I come down here to tell all this parliament for the land, the land right. I got word from my father and my old grandpa, that land belonging to me, belongin’ to Aboriginal man, before the white man, the horse and cattle comin’ onto this land. That’s what I got on my mind. I still got it on my mind.’

The recording session was easy and enjoyable. Vincent recorded his statement. Galarrwuy Yunupingu then laid down a musical ‘bed’ with his didjeridu, accompanied by the legendary George Golla on the guitar. (I am confident that this was the first time in Australia that the didjeridu—yirdaki in Galarrwuy’s Gumatj language—was played in a Western recording session.) Then Galarrwuy and I sang the song.

Galarrwuy is the son of Munggurrawuy Yunupingu, one of the plaintiffs in the other issue that I mentioned earlier, where the Aboriginals from Arnhem Land participated in Milirrpum v. Nabalco Pty Ltd and the Commonwealth of Australia. Galarrwuy was very well educated in the Western sense; additionally, he was a member of one of the great traditional Gumatj families. He was the interpreter in the court case, first in Darwin and later in Canberra. He had also spent the previous month in Sydney, getting rave reviews as the star of a play I had written, No Need for Two Blankets. Produced by Amy McGrath, the play was presented at the Australian Theatre, Newtown; again, Aboriginal land rights was the theme. 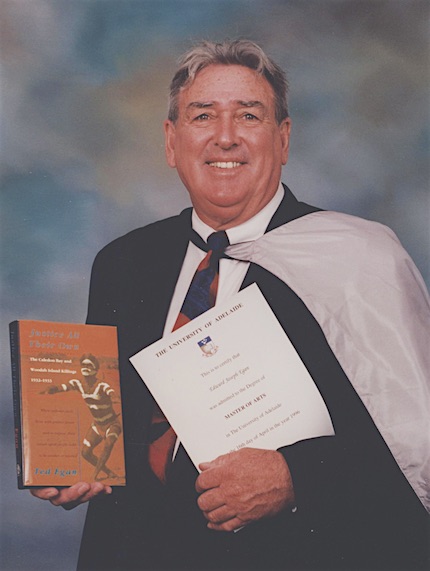 The ‘Gurindji Blues’ recording session was enhanced by the fact that, on that very day, Fred Hollows also operated to remove the cataracts on Vincent’s eyes. The old chap was joyful, saying, ‘I’m right for hunting kangaroo again!’ The next day we took Vincent on a tour of Sydney. He pronounced that it was ‘a bigger place altogether—more big than Wattie Creek’. He was also amazed that traffic did not go ‘over the top’ of Sydney Harbour Bridge.

Right: In 1996 Ted Egan graduated with a Master’s degree from the University of Adelaide. His thesis, an account of the Caledon Bay and Woodah Island killings, 1932–1933, was published by Melbourne University Press as  Justice All Their Own, a copy of which he is proudly holding.

On this same day, at Black Inc Studios, we recorded and mixed an album of fourteen of my songs, titled Outback Australia. I was under the direction of Herbie Marks, a musical genius who had called in George Golla and the eminent cellist Lal Kuring to help him sort out this ‘crazy bush bloke’.

They sat me down and were extremely—and genuinely— impressed by my percussive device, the Fosterphone—an empty cardboard beer box (24 cans size), which I tapped and stroked, bongo-drum fashion. I was gratified that three top musicians accepted, with approval, my innovative way of establishing a beat for my songs, given that I could not read or write what I called ‘dots on lines’.

I did not tell them that I had developed my Fosterphone skills as a means of deterring the many bad guitarists who thought I would need ‘accompaniment’. The world is full of inferior guitar players, people who often can’t see that their limited instrumental skill is a handicap when they are trying to write songs: they are restricted to the inadequate number of chords they know. That’s their problem.

It was fascinating being in the presence of Herbie, George and Lal. They started out by asking, ‘What key do you sing in?’ I knew what they were talking about. I looked at the Foster’s box. ‘If I play this carton, I sing in the key of F. If we are drinking Victoria Bitter, I sing in the key of VB. In Queensland, I occasionally lapse into XXXX.’  Undeterred, they said, ‘You sing; we’ll follow you.’

‘Gurindji Blues’ was well received, and Chicka Dixon sold thousands of copies to help finance the Aboriginal Tent Embassy in Canberra. In the meantime, twelve months later Outback Australia was a gold album. Not bad for my first and only day in a recording studio. I don’t think even Slim Dusty had a gold album at that stage.

By OSCAR PERRI Expert guidance deeper into the digital world and some cash – up to $10,000 – from Desert Knowledge Australia’s DKAccelerator program is...
Read more
Issue 13