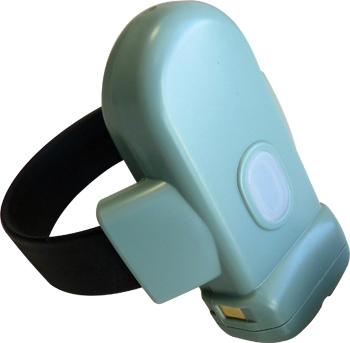 The effectiveness of surveillance anklets and bracelets (such as pictured) has been called into question in the wake of the shooting of four people in Darwin yesterday.

The alleged shooter was wearing one, yet he managed to move around Darwin unchallenged for an hour after firing the first shot.

The Department of Attorney-General and Justice declined to answer questions today about how these devices work and how they are monitored, but at a time when gadgets can be bought online to track “cheating wives” via their mobiles, answers need to be given.

Last month a killer, Jasmine Raymond (pictured below), convicted of manslaughter, was paroled but allegedly removed the device she was ordered to wear on May 16.

Her parole was cancelled but it took police 11 days to find and arrest her in Katherine. It was suspected she may have also been in Alice Springs.

After the recommendation of the Parole Board, an independent statutory body established under the Parole Act 1971, a paroled prisoner is monitored by Community Corrections, a branch of the Department of Attorney-General and Justice.

A source says the system is capable of tracking people but that is apparently being done by a private security firm, touting itself as “a global leader in security and related services”.

If the device is tampered with or removed, an alarm goes off, presumably indicating the location where this is being done. Then, of course, fast response would be essential to capture the person now regarded as a escapee.

Police are not responsible for the monitoring but they are tasked to find escapees.

According to sources, the monitoring depends on the conditions on which prisoners are released.

For example, some people are on a nightly curfew but are free to move around during the day.

Police have released a chronology of the events in Darwin last night.

They say they were notified of the incident around 5:45pm yesterday, when they received reports a man armed with a shotgun was firing rounds in the Darwin CBD.

“The alleged offender, a 45-year-old male, is believed to have attended a location at Finniss Street searching for a person known to him. He threatened two people at the location prior to shooting a 22-year-old female who sustained non-life threatening injuries to her legs. She is currently in hospital in a stable condition.

“A 33-year-old male was shot at the same location, and has died at the scene.

“At 5:50pm, the alleged offender attended a residence in Gardens Hill Crescent and fatally shot a 75-year-old male.

“At 5:59pm the alleged offender attended the Buff Club in Stuart Park, where he fatally shot a 57-year-old male,” the police states in a media release.

“The alleged offender has then attended an address in Jolly Street, Woolner, where he fatally shot a fourth person, a 52-year-old male.

“He has then contacted the Joint Emergency Services Communications Centre, requesting police protection.

“The alleged offender was apprehended by General Duties Officers and Territory Response Group Officers at the intersection of McMinn and Daly Streets at 6:44pm. A firearm was seized during the arrest. Investigations are ongoing as to how he came into possession of the weapon.

“The alleged offender is currently at the Royal Darwin Hospital under police guard. He is expected to be interviewed and charged later this evening or tomorrow.

“At this stage police are yet to determine if the victims were known to the offender.

“Police continue to ask for any witnesses to come forward. In particular, police are interested in anyone who may have vision of the incident including Dash Cam, CCTV or mobile phone footage.

“Police have seized three vehicles that they believe the alleged offender drove over the course of the day, and ask anyone who may have sighted them to come forward.”