Home Issue 13 Salvos: The small acts of kindness, and the big
Issue 13Volume 25

Salvos: The small acts of kindness, and the big 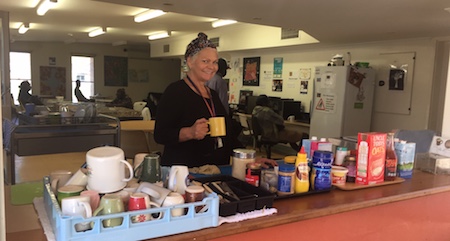 “Big Bob arrived on our doorsteps one morning – complaining.  And for about eight months he would regularly come to our Waterhole (pictured), complaining, telling us that he was either suing us or another service provider from Alice Springs and then remain in our centre having a shower, doing his laundry and having a cup of tea and a chat with anyone who would chat with him.

“Big Bob had nowhere to go, nowhere to belong,” Salvation Army Captain Nari McGifford recalled in a speech to the Rotary Club of Alice Springs, in the lead-up to the Red Shield appeal that starts tomorrow.

“Big Bob had some brain acquired injury.  Our daily encounters with Bob were always interesting and unpredictable.

“Big Bob is like many who access our centre. Nowhere to belong and nowhere to go. Whilst they are often only with us temporarily, more often than not they can find a ‘home’ for a bit before moving on.”

The Army is a mixture of little things that mean a lot, and big initiatives that most would be amazed are a necessity in our rich country.

For example, across the nation the Salvos have found that 60% of people who access their Moneycare financial counselling service are women, and Australians aged 65 or older are the most rapidly growing group needing the charity’s assistance.

“Older women have become the unexpected face of poverty in Australia. Their life as a primary carer, in the majority of cases, sets back their superannuation and employment options later in life. Many are fleeing family violence,”  says spokesman Mark Foyle, calling for an increase of welfare payments by at least $75 per week.

In the past five years there has been a 40% increase in the number of people accessing financial counselling through the Salvos. More than three in five of those were women, says a Salvos media release: “The average client is living well below the poverty line, living on income that is less than 40% of the average Australian household.

“One quarter of clients is experiencing extreme housing stress, paying 70% of their income towards housing.”

“He was struggling financially and out of employment. As he was a NZ citizen he was not eligible for benefits even though he had been working in Australia.

“His stress and anxiety levels were rising.  Suicide was something that he contemplated.  On the day we met him, we were able to assist him with some food and accommodation.  We were able to give him some temporary relief. 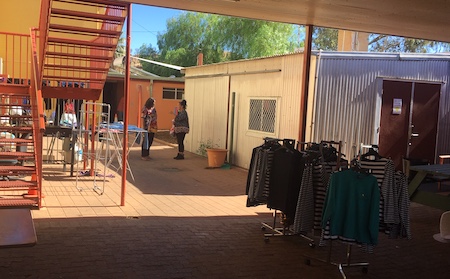 “His luck broke and he was able to obtain employment but things were still not smooth sailing.

“It took a while for pay checks to click in and his debts had been mounting and he was getting harassed about payments.

“We were able to continue supporting him. Refereeing for him as required, assisting him with temporary accommodation and helping him through this tough stage.  Life is still very uncertain, but for Anthony, there is now a lot more hope than when we first encountered him.”

The Salvos’ presence in Alice Springs is substantial: For women and children there is Towards Independence, a case managed housing program aiming to teach independent living skills; the Thrift Shop in Whittaker Street; Employment Plus; the Men’s Hostel on the Eastside (19 rooms, and eight independent living units); Emergency Relief; Men Taking Control; The Waterhole;  and of course the church which has kids’ and youths’ programs.

“Our Community Centre for many years was hugely important for Melissa. For a while she was living rough in the park. She needed the Waterhole to shower, and get her laundry done,” Captain McGifford told Rotary members.

“She was able to connect with another service which sorted out accommodation. Melissa has been living in a house for the last couple of months.

“This has not stopped her from coming down to visit on a regular basis, meeting up with friends.

“She has a coffee, cooks up a feed and sometimes sits and paints.  For Melissa it is a familar place which is safe and she finds respect and dignity.

“People come to us sometimes when their lives are falling apart and they have nowhere else to turn to.

“Unfortunately we do not have a magic wand that fixes everything. But we work hard to help people get back on track, provide a place of belonging which for some may be for a one off visit. Others will be with us for longer.

“We try to make sure when they leave they are a bit more hopeful.”

And on a global scale, the Salvation Army has grown to a membership of 1.7 million soldiers, officers and adherents collectively known as Salvationists.