It seems certain that the out-of-touch Country Liberals, commonly know as CLP, have failed in their bid to stop Warren Snowdon from starting his fourth decade as the Federal Member for the vast Territory seat, albeit with a reduced majority.

The ABC election computer says so, and so does the Australian Electoral Commission which does not list Lingiari as a close seat.

As the nation moves closer to the politics with which the CLP is supposedly aligned, the once proud Territory political force couldn’t find a candidate to knock off Mr  Snowdon as Labor in the NT has reached an unprecedented low under the Michael Gunner government.

Giving democracy its due regard, Mr Snowdon has every right to represent the NT: A majority – still a comfortable one – has voted for him. Yet a well-chosen CLP candidate, apart from Mr Gunner’s blundering, would have made capital from the widely held view that Mr Snowdon’s use-by date is up.

Instead the CLP chose Jacinta Price, the under-performer as a member of the town council, whose voters she sold out by reneging on her promise to serve a full term in local government.

The “Territory Party” couldn’t even produce their own hand-outs: They farmed out their propaganda to the Nationals’ media office interstate with a Canberra man listed as the person responsible.

It will be interesting to see if the hysterical Ms Price now exercises her option of returning to the council, restoring the paralysing five against four split.

Or will she expose the ratepayers to the bill of about $90,000 for a by-election to fill her seat? Some may consider that money well spent.

Ms Price could then continue to enjoy the adoration of the hard right on the south-eastern seaboard and the Murdoch newspapers.

It seems clear that her result last night would have been even poorer if the enrolment in the bush had been higher than the 60% or so.

The land councils seem to have an obligation to contribute to bringing Aboriginal enrolments up to scratch: After all, it’s the law, and the land councils are Federal instrumentalities representing the interests of Aborigines.

The constellation of Alice Springs local politics is going to be interesting.

Mayor Damien Ryan is reported to be scrutineering for Ms Price. (We have asked him if that is the case.)

He will not confirm nor deny that he has joined the CLP and will stand for an Alice Springs seat in the next NT election. 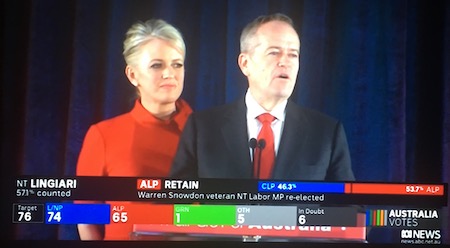 Cr Jamie de Brenni, a vice-president of the CLP, has flagged his intention of becoming Mayor.

Is the CLP going to impose Ms Price on the public again as a Territory candidate?

Meanwhile Jimmy Cocking (pictured handing out how to vote cards yesterday, in dark clothing in the centre of the photo, “for nature and a safe climate”), a Mayoral candidate in 2017, is an ambitions and well-connected figure in the town.

He is no friend of Ms Price whose father David  lodged a code of conduct complaint against him.

It was dismissed by the examining panel, describing the allegations as misleading, vexatious, frivolous and lacking in substance.