Rod Moss ventures into the weird and comical 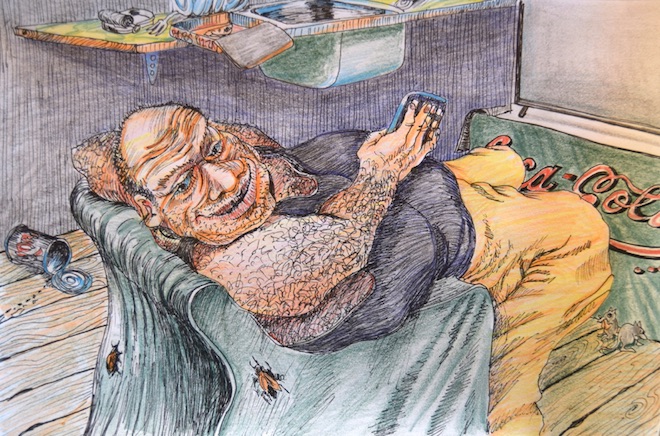 Bill Davis launched Rod Moss’ Blue Moon Bay at the Town Library this week. This new work is a significant departure from Moss’ memoirs, an essay into fiction, weird and comical, richly illustrated, and set in a small Australian coastal town. The following is the text of Davis’s launch speech.


Rod’s first major literary work, The Hard Light of Day,  won the Prime Ministers Book Award in 2011. Following this, in 2014 Rod gave us another erudite, riveting tome, One Thousand Cuts. Both these publications grace many of the book collections across the country and have contributed significantly to an understanding of our life here in Central Australia.

Rod’s endeavour to portray life here in The Centre via these stories has not been in the path of fashion; it has not been glamorous, sexy, heroic or romantic. It has come along a path of persistence, of daily gritty application. For decades he has chronicled the mechanics of cultural stoicism, the ingredients of despair, the disintegration of values whilst, at one and the same time, through the artist’s eye discerning the iconic stalwart silhouetted against a backdrop of town camp violence, alcohol abuse or the effect of demeaning welfare administration processes.

How has he done this?

And, as we know, Rod found ways to describe the whole damn shootin’ match: the endeavour of individuals, the survival power of individuals on a pile of rocks on the edge of town; daily to apply himself to the task of representing this through whatever medium was before him – woodcarving, photography, prose, poetry, the commitment of oil and acrylic to canvas, cardboard and car bonnet to describe poignant, unique and often wonderful ironies.

Well, it’s like the AFL footballer who goes to Echuca after years of being a star and behaving accordingly, growing a beard, getting fat, becoming nondescript and getting a game on Sunday with the Riverina Rovers.

It’s like being a guitar maestro and just playing for sheer enjoyment in the lounge room with friends.

It’s like being a prince in the Banana Republic then discovering the joy of nectarines.

What is Blue Moon Bay?

Here we have Fatman Fergus, as depicted by the artist and writer in open foray of Blue Moon Bay:
Fatman sings
Fatman Plays
Fatman eats his way through days
Clears his throat as he pisses
Flicks his boogers
Never misses.

Rod Moss, the artist, free from constraint, free of standards and expectations gives us the cannon.

Blue Moon Bay, as a pictorial description of decadence, is laced with flatulent characters, debauched people who keep chewing on the chicken drumstick even after the fridge has fallen on top of them.


Note: Moss is launching his third volume of memoir, Crossing the Great Divide, at the Lyapirtneme, the NT Writers Festival, tomorrow (Saturday) at 9am. The festival runs all weekend at the Olive Pink Botanic Gardens.