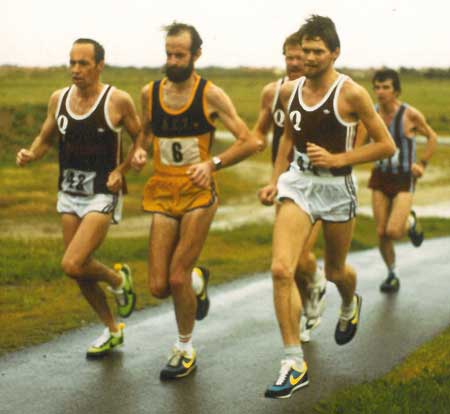 John Bell, well known in Alice Springs as a champion runner and a community worker for decades, is in a dispute with Robert de Castella, Australian former world champion marathon runner.

Mr Bell (at left in the photo), who now lives in Melbourne, is claiming that Mr de Castella owes him money for wages, an issue Mr Bell has been pursuing for nine years in legal and public forums.

He is now afraid that in the event of losing his case, legal and possible other costs may bankrupt him and he may lose his family home.

He has provided a response to our interview with Lingiari MHR Warren Snowdon in the lead-up to Saturday’s election. Mr Bell is making allegations that Mr de Castella has misused public funding he received for his project of taking young Aboriginal people to the New York marathon, and about Mr Snowdon’s role as Minister for Indigenous Health in connection with that.

Mr Bell provided substantial evidence, including this image (pictured at top) from a departmental document.

It is from the Health Department’s Nathan Smith, First Assistant Secretary, referring to Mr de Castella and his programs, in an undated “minute” says: “Should you agree to this approach, Minister Snowdon’s office will be briefed on the outcome of the audit, and the proposed steps to be taken to address future contract management of the project.”

Seeking a response and offering the right of reply, we provided the full text of Mr Bell’s letter to Mr Snowdon, Mr de Castella and the Federal Department of Health which replied that it “has no input or comment.”

The assessment panel of the Federal Government’s Indigenous Sport and Recreation Program (ISPR) has said Deek’s funding application “meets ISRP objectives to ‘a low degree’ and ‘the project demonstrated limited and short term broader community engagement … the proposed budget demonstrated poor value for money by catering for an exclusive group in a high cost manner and therefore poses a financial risk. The high cost of travel is a prohibitor. As per the ISRP conditions, international travel and accommodation is not permitted to be funded.”

Public funding of de Castella programs runs into many millions of dollars. The Alice Springs News has covered the issues extensively – google our reports here.

This is Mr Bell’s letter to the Alice Springs News:

On his own Federal turf, in 2012 Warren was Minister for Indigenous Health in a Labor government. The Department of Health was in his portfolio.

In 2012, Warren gave me a similar response to my questions about the expenditure of $20,000 – $30,000 from the Department’s Indigenous Marathon Project grant funds to pay lawyers for legal fees in a civil  dispute matter before the ACAT Tribunal.

Of course, the Department remained silent, as Departments tend to do.

Then in 2015 by order of the AAT under the FOI Act, I obtained information showing that a secret departmental audit in 2012 discovered that $24,342.57 had been drawn from Indigenous Marathon Project grant funds without the Department’s authority in 2011 and 2012 and was paid in seven separate payments  as legal fees to lawyers in the ACAT dispute.

I have approached Warren since then asking “Did the Department make him aware of the audit in 2012?”.
I asked Warren: “Have the unauthorised legal fees of $24,342.57 been repaid to the Commonwealth?”

Although I have continued to pose these questions, I am yet to receive a response from Warren or from the Department.

On the Disclosure Log, there is evidence of the audit and the Department’s own internal concerns about the unauthorised expenditure which the Department flagged to Warren in 2013.

The evidence is freely available to the public and is published on the Department of Health’s national Disclosure Log website for all to see.

In the light of this available evidence, I believe my two questions are fair and reasonable because they relate to government funding for a project that exists and continues to grow for the benefit of the Aboriginal and Torres Strait Islander community, especially in Central Australia.

Is Warren willing to be transparent in this issue of the use of Aboriginal grant funds as the election campaign is [nearly over]?