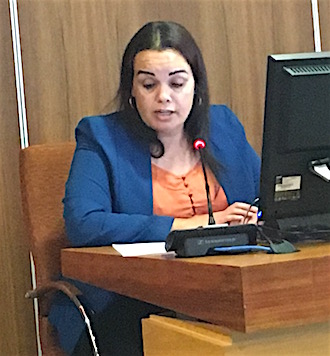 All Code of Conduct complaints against Councillor Catherine Satour have been dismissed as “vexatious, frivolous, lacking in substance, misleading” and in some instances “grossly mistaken”.

Reading a prepared statement made at last night’s council committees meeting (left), Cr Satour did not name the complainant nor specify the content of the complaints.

It is widely assumed that the complaints against three councillors – Cr Satour, Cr Eli Melky and Cr Jimmy Cocking – all made within days of one another, were associated with now former councillor Jacinta Price, who formally resigned from council last night in order to contest the upcoming federal election for the Country Liberals in the seat of Lingiari. (CORRECTION: see at bottom.)

Ms Price was not present at the meeting. The Alice Springs News this morning asked her to call, specifying that the enquiry was about the Code of Conduct complaints against Cr Satour.

Ms Price sent the following message by text: “At this stage I am still awaiting legal advice. Defamatory and untrue comments were made by Cr Satour within Council Chambers. No family member of mine threatened her as claimed and police did not investigate her claim because no one could substantiate her allegations. Nor was there any evidence on CCTV footage to back up her allegations.”

This appears to acknowledge that the complaints have come from Ms Price or people associated with her.

She appears to be referring to an incident at council on 29 January 2018 during which, Cr Satour said subsequently, she was “verbally abused and threatened with violence by Councillor Price’s family”. This allegedly occurred  after Cr Satour made a statement in the chamber on behalf of Arrernte women, “that Council support us in our endeavour to strive for unity, reconciliation and harmony amongst our Community of Alice Springs, so we can work together to address our problems and move forward.”

Cr Satour this morning would neither confirm nor deny that the complaint had anything to do with Ms Price and had “absolutely no comment” to make on Ms Price’s statement to the News.

The News also asked Cr Melky whether the complaints against him were associated with Ms Price. He similarly would neither confirm nor deny. The News put to him that it will be important to “clear the air” before the federal election. He said he accepted that point.

Cr Satour too is seeking legal advice and told last night’s meeting that she will be considering her options for holding to account those responsible for making the complaints “should they be found to have not acted in the best interest of the community”.

“Good governance” would require that, she said.

The Code of Conduct Notices  against her were made by two separate “applicants” and contained “multiple” complaints.

Not a single complaint against the any of the three has been upheld in a 12 month-long investigation by an independent disciplinary committee under the Local Government Act. The committee members are unknown and its deliberations have been carried out in complete secrecy.

The investigation of Cr Satour’s case lasted the longest. Cr Cocking made a statement about the dismissal of the complaints  against him in November last year. Like Cr Satour, he is a first-term councillor. Cr Melky, now into his third term, made his statement last July.

Cr Satour said the community should be “alarmed” that the three councillors had to endure these “vexatious, frivolous allegations” while still attending to their duties. Their ordeal highlights “a failing in the system”, she said.

The complainants had had “some initial success in their objectives to slow me down, distract and harm my ability to meaningfully participate fully in council business” but they had failed in this goal.

She listed some of the achievements of council during the period of the investigation: work on the 2018-19 budget “keeping the rate rise to a bare minimum”, finalising the Strategic Plan, supporting “consultation and transparency around Anzac Oval”, the climate action plan, and the town master plan.

Her own achievements included winning support from council to have the Aboriginal flag raised on Anzac Hill on three special occasions annually, having a Central Arrernte welcome to country and smoking ceremony included in the Australia Day ceremony, inviting Traditional Owners into council to work on youth issues, and chairing the Safe Public Places committee, working on behalf of council with the NT Government.

She said she is also proud of becoming, at the invitation of custodians, the secretary of the Central Arrernte Alliance, which was formed following on from council dealings with custodians.

During her statement Cr Satour was visibly strained, and at one stage found it necessary to stop in order to maintain her composure. It brought to partial closure a period of considerable stress for her, and upheaval and division for the council, yet the only comment  from Mayor Damien Ryan was a correction to a date she had given.

CORRECTION: Statements last night reveal that Jacinta Price and her parents were the source of three Code of Conduct complaints  with respect to two councillors, Crs Cocking and Satour, but not three. Neither Jacinta Price nor people associated with her were complainants against the third councillor who was the subject of a Code of Conduct complaint in 2018, Cr Eli Melky.