The festival of lights – and phones

Parrtjima is photogenic, especially just after sunset. Everyone had their phones out, including me.

The expanse of red earth reflects a rosy light, the range looms on the horizon, silhouetted against the long afterglow in the sky – all of this sets off the exhibits beautifully.

I don’t know that it’s a space for taking in detail as much as ambience, including the experience of walking for the sake of enjoyment, rather than to get somewhere, alongside people whom you may or may not know but are bound to, for the moment, by simple congeniality. 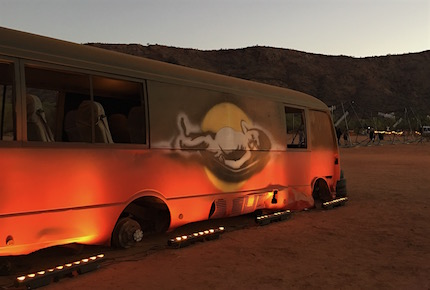 The art amplifies this enjoyment, it gives you shared points of focus, multiplies the sensations of colour, movement, contrast. It stimulates the imagination, none more so, for me, than the bus (at left), sitting on its axles, like many an abandoned hulk in the desert, but bearing on its flanks images of the cycle of life: on one side, a baby in a coolamon, on the other, that baby grown. In between, the implied life’s journey, grounded in this red dirt country.

The expressed wish of the show, articulated in the welcome from apmereke-artweye Benedict Stephens, is that it imparts an understanding of country as alive. This bus, its art by Phillip McCormack with Tom Fry, accomplishes that in the sense that country bears life: its life is necessary to engender others, it shapes and carries those lives and their traces after they have passed.

The animation of other art work takes a more literal approach: life equals movement. It is not without its charm, for instance the impression of flowing water in Annette Nungala’s Dinosaurs at Epenarra, and the fluttering butterflies in Serena Hayes’ Intelyapelyape (below right). Children love it. Appreciating this imagery projected onto the ground is inseparable from appreciating children’s enchantment as they prance across the changing surface, seeing their own bodies become momentarily part of the work.

Animation is writ large with the projection onto the ranges, the signature work of the whole experience, although for me the least appealing (and not susceptible to photography by phone). This is in part because of its history and underlying assumptions, that the country is a blank canvas, that it somehow needs these effects to be appreciated; in part because the sheer scale of the work diffuses its visual and narrative interest. 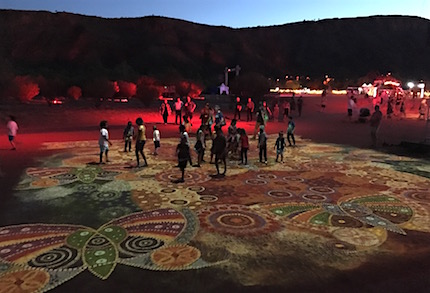 This year video projections in the foreground helped diminish the problem of scale, tying the imagery to the immediate surroundings of the audience. A beautiful small white-trunked gum, more or less at human scale, was used to good effect, and indeed fleetingly carried the image of a human face. Imagery played across the ground in front of the tree and seemed to run away, across the flat, into the foothills and sweeping up the range. The effect was something like one seen often in film, the speeded up movement of clouds across the sky.

I don’t know what you would hold with you from all this, including from its rather generic story, narrated by Aaron Pedersen, with its worthy but well-worn tropes like “we are all one” and  “we follow in the footsteps of our old people”. The song, from Parrtjima 2017, was a much more effective accompaniment, its driving beat and ringing refrain in Arrernte –  “Apmere Ahelhe Itethe”, which means “All Country Is Alive” – a strong match for the necessary simplicity and scale of the projection.

This said, the audience I was with this year broke into spontaneous applause when the projection finished, with the woman sitting next to me exclaiming how “spectacular” it was.

The big drawcard on the last night, especially for hundreds of Aboriginal children and youth, was Baker Boy (Danzal Baker), the Top End rapper who is the current Young Australian of the Year. “Baker Boy! Baker Boy!” chants broke out constantly in the half hour leading into his performance and ecstatically once he came on stage. They knew his music, arms shooting up in the refrains: years ago they all would have been holding lighters, now it’s phones (at bottom). 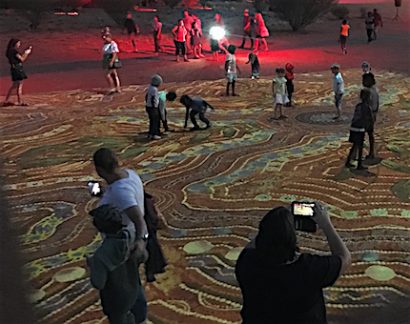 The performance capped off a very diverse cultural program complementing the light show. Until recently, the best regular annual opportunity in Alice Springs to experience Aboriginal culture, and hear about  it from Aboriginal people, was offered by Desert Mob, especially through its symposium program alongside the exhibition.

Parrtjima is now doing this, with different offerings each night across the festival, including some in Todd Mall. This year, being the International Year of Indigenous Languages, there were introductory workshops in several of the desert languages; there were talks on ideas, politics, history, culture, art, cultural enterprise; art demonstrations; a film program; and a live music program.

All of that, combined with accessibility, has got to rub off positively, for locals, Aboriginal and otherwise, and for visitors. Particularly the concentration and range of experiences makes for a very attractive offering for visitors with a special interest in Aboriginal culture.

But, it costs a lot of money, off the scale compared to any other local cultural endeavour, with the exception of the long ago Yeperenye Festival. It would be good to see a transparent cost-benefit analysis, of not just the impact on tourism but on the social health and cultural vitality of the town and region. And of the perspective it offers for the development of a comparable program that would be permanent, year round – part of, for instance, a national Aboriginal art and culture centre.