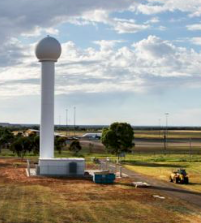 Overcrowding and child safety in the Barkly region will be on the agenda for Australia’s first-ever Regional Deal worth $63m, with $30m each coming from the NT Government and the Feds, and $3m from the Barkly local government, all over 10 years.

Tennant Creek will get a further $15.4m from the Feds “to acquire, install and operate a new Doppler (similar to the one pictured)  weather radar over the next 20 years,” it was announced today.

Nigel Scullion, of the Federal Liberal and Nationals, Territory Labor Government front bencher Gerry McCarthy and Tennant Creek Mayor Steve Edgington are saying in a joint media release that the deal would “improve the productivity and liveability of the Barkly region, introducing 28 new initiatives to drive economic growth.

“It will support local Aboriginal leaders develop responses to local priorities in recognition of their ongoing connection to country as traditional owners and custodians of the lands.”

Mr McCarthy says the Barkly is an important mining hub and has world-class cattle stations as well as deep cultural roots.

PHOTO from Facebook: A Doppler weather radar in WA. The one in Tennant Creek was decommissioned despite local angry protests and the met station there shut down in 2015.