Above: Image of denuded pastural land in the Central Land Council letter. Images below of dead and starving horses are from the same letter. 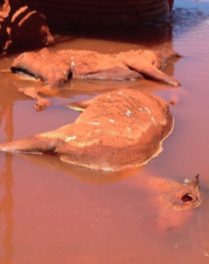 There is still no comment from the Central Land Council (CLC) about horses, numbered at around 250 by a local resident, starving to death on Aboriginal land north-east of Alice Springs.

Serious health risks to people have now been identified and government personnel have urged the horses to be culled, according to a letter circulated by the CLC which is today holding a meeting at Yulara Pulka outstation near Uluru, including delegates from 75 remote communities.

The Department of Primary Industry and Resources has said “Aboriginal Land Rights Act land is managed by the landowners, in conjunction with the Central Land Council” and the department “is aware of this situation and is liaising with the CLC to manage the response”.

The Alice Springs News Online has obtained the letter to residents of  Mulga Bore and Angula, “distributed some time in March” according to the CLC, saying: “Whoever owns the horses is responsible to look after them. They are not doing this.

“There is no grass and only water from the bores. This is very serious. The horses are starving to death.

“They are wrecking the houses and bores.

“They are dying all over the place and poisoning the water and land.”

The writer of the letter says she had tried to hold a meeting “but no-one came. I tried very hard to find people at home and on the phone but could not find anyone. 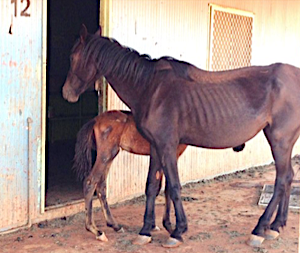 “I left messages again today and no-one calls me back.”

The writer says what is happening violates animal welfare laws and “dead bodies poison the trough water and other pools of water so more horses die slowly from having no clean water.”

What’s more, people are at risk: “The dead bodies are close to the houses so it is very unhealthy for people.

“When the horses dig holes that fill up with water mozzies can live there and give people diseases.

“The NT Government Environmental Health Manager has been told. The manager said that the dead horses and all the area needs to be cleaned up and that the number of horses needs to come down so the problem doesn’t happen again.

“The NT Government Animal Welfare Inspector … said that the horses need to be put down.”

“The horses are breaking the houses and water pipes. 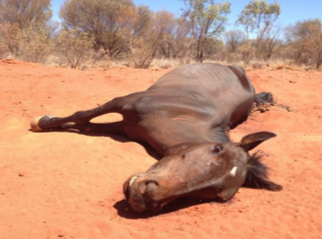 “They are digging around the bores, troughs and houses looking for water and so the foundations are not safe.

“Because we weren’t able to have a meeting, someone else needs to make a decision now.

“There is only one option.

“There needs to be a cull to stop the animals suffering, stop them making the homes unhealthy and stop them wrecking the houses.”

The News has made several requests to the CLC for comment. This morning we emailed these questions: What is happening now? What is the CLC doing? Any comment on the situation. Please respond to the comment from the Department of Primary Industry and Resources.