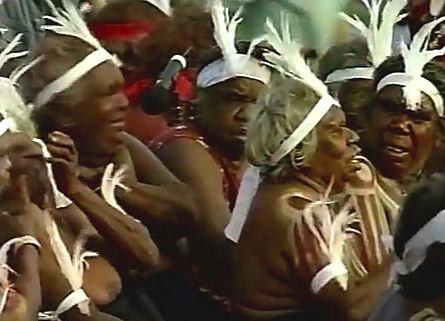 Here is the art gallery and cultural centre debate, both of them national and Aboriginal, in a nutshell.

HAROLD FURBER: Well, that’s what I am here for. We were presenting it to the council all last year, that very thing, over and over and over again, in writing.

MARDI COTTERILL: Why have so much time and money have been wasted trying to squeeze the art gallery into our skinny Todd Mall and wreck the Anzac Oval?

HAROLD FURBER: You have to put that question to the Northern Territory Government.

That exchange at the meeting of the Rotary Club of Alice Springs on Wednesday put the endless government mishandling of the projects neatly into perspective.

Ms Cotterill was one of the club members quizzing the night’s guest speaker, Mr Furber, who with Owen Cole heads up the group planning the cultural centre.

They had advocated for it and the gallery being combined but “the government changed it into two projects. This created division which unfortunately has affected our town negatively,” said Mr Furber.

“It should bring all of us together, working together on a national project. That’s what we had envisaged and we still think it can happen. 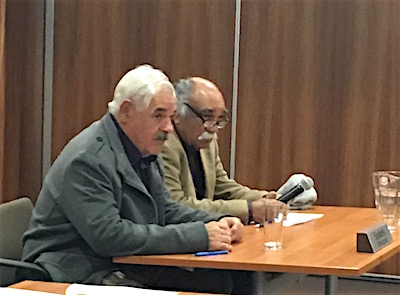 “Mr Mayor, we need to work together on this, me and you need to be like that” (showing his index finger and middle finger entwined). Mr Furber told the meeting this is what he had urged Mayor Ryan to do. It did not happen.

Mr Cole (near camera) and Mr Furber making a presentation to the town council.

So for the time being Mr Furber and Mr Cole are pressing ahead with the centre, holding an important stakeholders’ meeting in Sydney next week.

It is being arranged by volunteers, self-funded to the tune of $90,000, partly by donations from organisations around town. A contribution from the government is hoped for.

And so is the $20m the Gunner Government had promised. Mr Furber said he “assumes that the government still supports that”.

It will seek information and endorsement from a string of workshops around the nation and is planning to have a report ready by about the end of June.

The report will state what the centre should be doing, what it will cost and how to “sell the project as a national, iconic, living entity,” said Mr Furber. 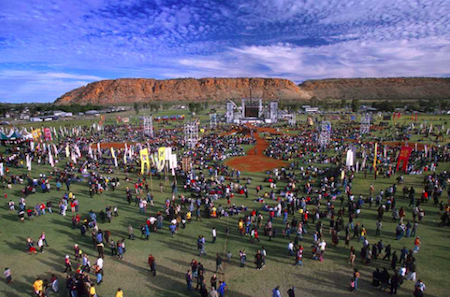 “We will hand it to the NT Government but it remains ours, the property of the National Aboriginal Cultural Centre steering committee.”

“All the storylines must come through The Centre, right through The Alice, up to Arnhemland. It’s alive.

“That’s our selling point against Sydney or anywhere else, or Adelaide, for that matter.”

The question why it should it be south of The Gap is a no-brainer. Mr Furber made that clear.

“The Gap is the cultural entrance to the town.

“The Pitjantjatjara mob, when they came up from the south, they had to camp south of The Gap.

“They needed permission to come through The Gap. Most Aboriginal people know this. It is so the town is safe and for a whole lot of different reasons.

“Town camps were deliberately set up for Ptijantjara people south of The Gap.”

The Yeperenye Festival in 2001 (above, right), which had hundreds of tribal visitors and performers from around the nation, was held south of The Gap.

I would like to provide some context and clarity in relation to statements in this article about the NT Government’s contribution to the development of the National Indigenous Cultural Centre.

Firstly the NT Government has made a clear commitment of $20 million towards this project. That commitment stands and the funds are committed in the Northern Territory budget.

The proponents of the project have drawn down against this commitment to support their early planning works.

So far, we have contributed around $320,000 to support initial operations, consultation and planning. This includes funding for a project officer position for over 18 months.

We are providing a further $250,000 towards the Business Case being done by Deloitte, including supporting comprehensive engagement with local key stakeholders and Traditional Owners in Alice Springs.

We will continue to support this important project and are always happy to provide progress reports.

A touch of light: rockpools and desert frogs