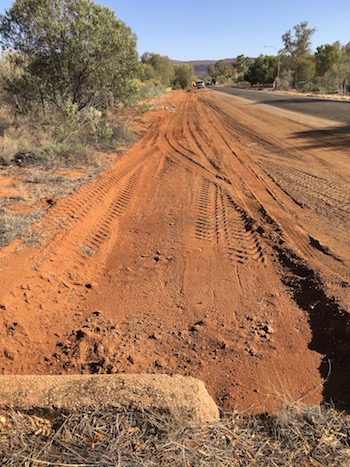 The Town Council is honing its  policy of excluding the public from all but the most trivial issues until they are resolved behind closed doors – such as the Aboriginal gallery on Monday – or are responded to with offensive platitudes, such as the treatment of verges in Schaber Road (pictured).

We first sought an explanation for the Schaber Road situation from Councillor Glen Auricht, but he considered the matter “operational” and passed the buck to staff.

Council workers had cleared with a grader the lightly vegetated verges  until irate residents stopped them.

By then, in some sections small trees and native grasses nurtured by residents, plants that were clearly no obstacles to water flow, had gone, while most of the culverts under the driveways remain blocked.

Three weeks later we got this from Technical Services Committee director Scott Allen, failing to respond to specific questions, and requests to comment about work described in detail and supported with photographs, and certainly not apologising for the mess made of Schaber Road:

ALLEN: “Council does have a policy titled ‘Road Verge Aesthetics Policy No #412’. This policy’s purpose is to aid staff in providing and maintaining a safe, environmentally responsible and visually attractive roadside. In the event of conducting works to maintain and make our roads safe, vegetation may be impacted.

FACT: Mr Allen does not provide a shred of evidence that leaving small trees and a thin cover of native grasses makes Schaber Road unsafe. He omits any detail of the policy and how it is expected to be implemented.

ALLEN: Council makes every effort to minimise this and, where appropriate, may replant in certain areas.  Where vegetation is not replaced it is due to traffic, drainage and line of sight concerns.

FACT: Mr Allen fails to demonstrate that any of these three problems could have occurred by leaving the verges alone in Schaber Road.

ALLEN: The particular circumstance raised in this enquiry is in reference to works to clean culverts in that area.  Culverts are cleaned for drainage and community safety, however this work does require heavy equipment to be used in a confined area.

FACT: Bunkum. The heavy equipment cleared the entire verge, not used only “in a confined area”. As we reported, the work supervisor talking to residents in Schaber Road explained that the culvert clearing is done by a vacuum device which flushes and pumps the soil out – not a big job, and it can clearly be done by leaving the machine on the sealed road.

Asked why a council mower driver had chopped up a styrofoam container by the roadside and left the bits behind (we provided a photo), Mr Allen said mowing crews also had to collect rubbish: “Council encourages the community to report roadside rubbish via the Neatstreets app.”