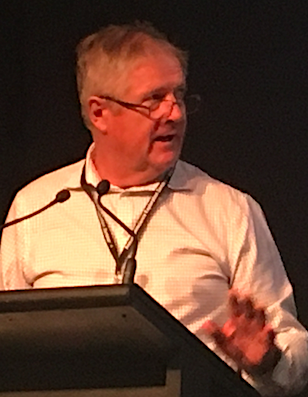 “If two percent of that becomes economic, that’s INPEX.”

As Parliament debated gas legislation today Alister Trier (at left), Chief Executive of Department of Primary Industry and Resources, was addressing some 250 mining personnel at the AGES conference in Alice Springs, the biggest in six years.

He was talking about the estimated gas reserves in the Beetaloo Basin, between Tennant Creek and Katherine.

INPEX, of course, is the Japanese company that has just finished building the biggest commercial complex in Darwin, to handle gas from the Timor Sea and ship it out.

The onshore gas Mr Trier was talking about is “right next-door to a pipeline”.

He named his Powerpoint file “implementation” and he maintained his low key while speaking about an issue that had nearly torn the NT apart.

The word fracking did not pass his lips. It is “hydraulic fracturing” that is now entering the phase of “preparing for exploration,” according to the conference program.

Mr Trier ended his speech on a sober note – like the rest of it: “With the concerns of the community, and the issues floating around, there have always been some tensions around these activities.

“I think the [Judge Pepper] report itself was really an excellent piece of work. In my time in government I’ve never seen that cooperation across government, between the different agencies.

“There are still tensions, there’s still people yelling at each other, and the rest of it.

“But comparatively it is a really positive exercise, people working as hard as they can, to get this done.

“The same cooperation has come from the industry, that has really assisted us to a professional and credible way forward, that stands the test.”

It matched the “intent and integrity of the [commission’s] 135 recommendations”.

All of them have been adopted by the government but some are still scheduled to be complied with.

This is a snapshot of the process outlined by Mr Trier.

• There are 31 recommendations that must be completed prior to environment management plans (drilling of petroleum wells and hydraulic fracturing) could be considered.

• Engagement with Universities for research and skills training.

• Industry prepares Environment Management Plans – expected to be lodged within the next four weeks.

• On ground activity recommences in 2019 – this paragraph was in bold in the powerpoint document (drilling, hydraulic fracturing, seismic survey).

• Balance of recommendations (about 90) to be completed by 2021-prior to production licences being granted.

Northern Territory communities will suffer should the NT Government be allowed to get away with its attempts to fast track fracking in the Beetaloo Basin, says Graeme Sawyer of the Protect Country Alliance.

It was “deeply disappointing” that Trier had been spruiking gas reserves when there was overwhelming community opposition to fracking.

“This entire process has been rushed because the NT Government lacks the creative grey matter to come up with a solution to the Territory’s economic woes that doesn’t involve injecting poisonous fluids through groundwater.

“Lessons from Queensland show us that the economic benefits brought from the fracking industry are fleeting, employment is minimal and temporary compared to other, less destructive industries like tourism, which the NT would be better off focusing on,” says Mr Sawyer.

“Communities between Tennant Creek and Katherine have been totally ignored while the government has fast tracked fracking.

“There has been no meaningful engagement and consultation in the regional and remote towns and communities set to be impacted first hand. These communities and their businesses need to understand how the NT Government is going to protect them from the economic disaster fracking brought to towns like Miles in QLD.”