I am writing to strongly express my disappointment that the Alice Springs News would publish the sensationalist article “Help from fracking campaigner, or manipulating students”, which publicly questions my character, without contacting me directly and giving me the benefit of discussing this before it being printed.

I have not been contacted by the Alice Springs News with regard to this issue, did not receive any text or any communication from Erwin Chlanda. Please provide any evidence to substantiate your claims, Erwin. I am happy to provide my phone record.

I was contacted by Jimmy Cocking on Saturday morning to say that he had been approached by Erwin re this issue, however as I was not contacted myself I was not aware that this article was to be published.

This has public ramifications for me and my family, with people now reacting to this on social media.

I was not involved in organising the Alice Springs School Strike For Climate.

As the Communication Manager at ALEC I shared the poster amongst our networks, as did many other people who are concerned about this issue in Alice Springs.

As adults were invited to support the rally, there were many adults present at the Friday School Strike. A number of adults spoke at the speeches as per invitation by the rally organisers.

I was asked to take photographs of the rally by a member of the AYCC – I don’t know if this was discussed fully with the organising group. I arrived at about 8.15am and only caught the last of the speeches, took the photographs, took some video footage, saw the first part of the March and then left for other commitments at 8.45am.

At the first climate rally last year, there were chants when the photographs were taken. As I was taking the footage, I think my direct words were something like: “I know that chanting is a bit dorky, but do you want to do some chants for the footage we are taking?”

People said yes, and I then proceeded to suggest two chants that were written on some of the banners. The children (and adult supporters) proceeded to come up with a range of their own chants from that point. Adults and children were chanting because adults were invited to support the kids.

As someone whose skills include communication and organisation, I am often asked to MC events, and take large group photographs. I was volunteering my time to do this.

This is sensationalist reporting by the Alice Springs News, aimed to increase drama and tension in our community. I reject this approach.

Climate Change is an issue where we all need to work together, and my approach is always from an inclusive perspective.

Again, it might sound dorky, but I choose love over hate and community cohesion is essential in working together towards a sustainable future for all of us.

We welcome the opportunity of publishing your account of the events. However, we stand by our report as true, in the public interest and supported by video and other evidence, including my direct observation.

We don’t accept responsibility for social media comments except for those we are making, which are limited to publishing the story heading and one photograph.

I rang Jimmy Cocking, the principal of the organisation for which you work, at 8.23pm on March 15, the evening before the report was published. As I could not make contact I texted Mr Cocking one minute later: Hi Jimmy, please call me. This is urgent.

He: Sorry I missed your call. Still urgent?

He: I’ll call you later. [He gives family reasons for not dealing with the issues immediately.]

Me: Sorry, this cannot wait.

Mr Cocking and I had a four minute conversation from 8.03am after which, as he told me, he rang you, contrary to your claim that “I was not aware that this article was to be published”.

Following that Mr Cocking and I had a further conversation which is summarised in my report: He passed to me what you had told him.

It was absolutely clear to Mr Cocking that I was preparing a report. 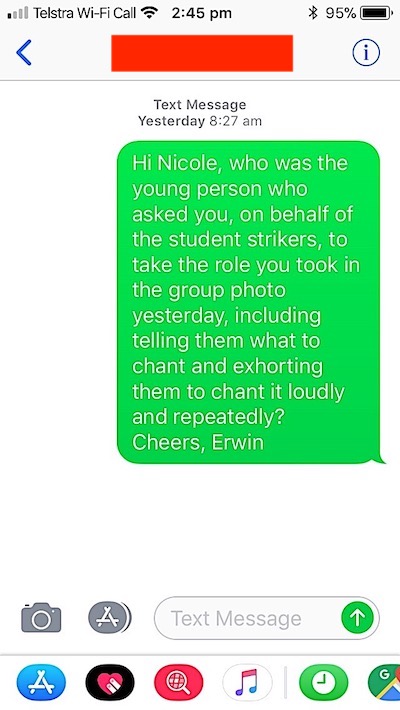 So from my understanding, you had full knowledge of our interest in the events, and the facts we were about to publish, shortly after 8am yesterday.

I then texted you at 8.27am with what I saw as the remaining open question (see image at left. I have redacted your phone number). I received no reply from you, as we mention in the report.

By the time we published I had dealt with the substance of the report by communicating with the most senior employee of the organisation for which you work and you have now replied in that professional capacity.

Our report was published at 5.10pm – nine hours after you became aware of its impending publication and its subject matter.

We had deferred publication to give you and other sources an opportunity to reply.

If by your last comment you mean to imply that my report was motivated by “hate” I reject that entirely.

I have no antagonism towards you, ALEC, or the issues at stake (action on climate change, fracking) on which I stand by our proud record of detailed independent reporting over more than a quarter of a century.

And I refer readers to our report on the student strike for evidence of the respect shown to their initiative.

Please have the decency to print my response under the original article, as that it what has been shared on social media and is the driver of the hateful comments.

I never received a text from you. Just because you sent a text doesn’t mean I received it. It is unfair and misleading to publicly claim you contacted me and that I did not provide a response.


This is the response from the Alice Springs News Online:

At issue here is the right of the students to manage their activities without unsolicited influence from outsiders.

The organising committee has stated, through one of its members, that it had not invited you, and we have reported that.

I note that you have not received the text I sent. However, you have been aware of our question since about 8am on Saturday, and have still not answered it: Who invited you to direct the photo session during the rally on Friday morning?

We have published your emails in full, now with a prominent link from the report published on Saturday.

I have already told you that we do not take responsibility for what happens on social media and they do not guide nor control our editorial work.

However, I think it is most unfortunate that what some people, frequently uninformed, post on social media is causing you distress. We are frequently on the receiving end of that as well.

The gap between activists and those they are speaking for