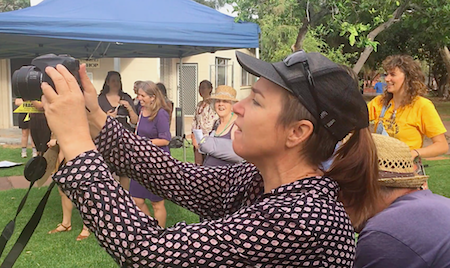 Nicole Pietsch, a prominent activist against fracking, was directing the chanting by students participating in the “School Strike 4 Climate Action” in Alice Springs yesterday.

While taking photographs and possibly videos of the group, Ms Pietsch (pictured at the rally) said “shall we say no fossil fuels three times? … Say no fossil fuels … Why don’t we do climate actions now? … Really loud”.

The group followed her leads (see video at bottom).

There has been much discussion about the possibility of the world-wide school strike movement being exposed to influence from established pressure groups. In fact, earlier in yesterday’s rally a mother drew attention to that in a short speech, which was followed by articulate presentations by several young people. (This article is not to suggest that they do not genuinely hold the views they expressed nor that they do not have reason to do so.)

And yesterday’s The Australian newspaper, under the heading “School students’ strike: adults organised climate rally” reported: “A school strike today promoted as a ‘student-led protest’ by thousands of children skipping classes to attend climate change rallies around the nation has been organ­ised by a network of adult activists from climate campaign organisations.”

Ms Pietsch is the Strategy and Communications Manager of the influential Arid Lands Environment Centre (ALEC) which, according to its CEO Jimmy Cocking, has 350 paid up members.

Triangular yellow “No Fracking” signs were prominent in the rally.

Mr Cocking, when asked whether the students were being taken advantage of said they were being “supported”.

NEWS: Ms Pietsch was telling them what to say and how to say it and how often to say it. She is guiding them. She was giving instructions to the supposedly independent student protesters.

COCKING: The adults there were giving support. It was the first time [the students] have done this sort of stuff. It’s important to do it safely.

After speaking to Ms Pietsch and returning to our phone call, Mr Cocking said he had been told she had been asked by the group “to lead the chant for the photo so they can get some good footage for the Australian Youth Climate Coalition … for their purposes.

“She is a communications person. She was taking [the photos] as official photographer for ALEC but also on behalf of the Australian Youth Climate Coalition because they asked for that support,” said Mr Cocking.

NEWS: Who in the group asked Nicole to do what she was doing?

COCKING: It was the Australian Youth Climate Coalition, the group of young people who are involved in organising [the rally].

NEWS: Specifically who made the request to Ms Pietsch?

COCKING: I don’t know that specifically. It was someone in the group organising [the rally]. Specifically? I don’t know. That’s just what I was told just now.

NEWS: I would like to know who specifically it was that [who made the request].

COCKING: It was one of the young women involved in organising it.

I requested a name so I could coroborrate the claims.

Mr Cocking said he did not know any name, has provided no further information but said that ALEC wasn’t involved in organising the rally.

We texted Ms Pietsch at 8.27am today asking for the identity of the person who made the request to her but there has been no response at the time of publication. We will report it if and when we receive it.

We have also contacted one young person who was at the rally and he said he is not aware of any arrangements with Ms Pietsch.

We have left messages for two others who were at the rally.

Meanwhile the national daily describes the Australian Youth Climate Coal­ition as a non-profit company registered as a charity with an all-adult board and 68 adult staff.

“The AYCC was set up a decade ago to mobilise young people on climate action by Anna Rose, an adult activist and the wife of former GetUp national director and Greens candidate Simon Sheikh,” writes the Australian.

“Mr Sheikh was listed in the AYCC’s 2013 constitution as one of its 16 full members, along with Ms Rose, with voting rights to elect the group’s board.

“The adult-controlled AYCC has extensive links to other clim­ate action and anti-Adani groups with large campaign budgets, ­including the Sunrise Project, GetUp and Greenpeace.”

Ms Pietsch has been referred to in the Alice Springs News Online in 15 reports since August 2013, mostly in connection with anti-fracking activism.

A member of the rally organising committee, Jordyn Kindness, says the committee had not been “talking as a group” about requesting Ms Pietsch to direct the photo shoot, and she is not aware that anyone had approached Ms Pietsch.

Ms Kindness says the group wants the strike to be seen as an initiative by students, acting in collaboration with other groups to deal with “something that will affect all of us” and making their voices heard.

“This is not about adults manipulating students,” she said this morning when asked for comment.

UPDATE, 10.17am 18 March 2019: Ms Pietsch has given her account of what happened and Alice Springs News Online editor Erwin Chlanda has responded. We drew attention to this at the head of this article earlier on 18 March.


UPDATE 9:40am March 27: We have changed the word “manipulating” to “orchestrating” in the heading of this report. A reader has suggested the change because it more clearly reflects the facts. We agree with him.