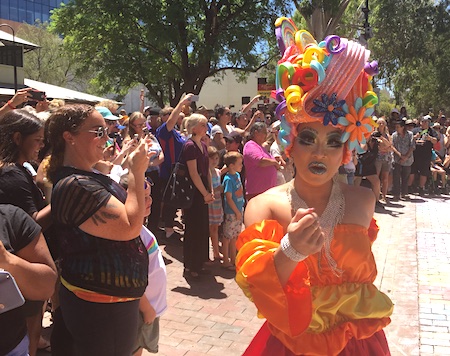 “Boosting visitation and growing the local economy during the shoulder period” is something FABalice is doing for the town, according to a government media release quoting Member for Braitling, Dale Wakefield.

But the spectacular featuring drag queens – 11 of them breezed into town for the event – came at a cost to the taxpayer of $190,000.

This included 100 sold to people from interstate or overseas.

If the purpose of the “event funding” was to attract out-of-towners, then on those attendance figures it was achieved at a cost of $1900 per head.

The money comes from “the $103m Turbocharging Tourism stimulus package to attract visitors, create jobs and put more money in the pockets of Territorians,” says a media release from Tourism Minister Lauren Moss.

We asked Ms Moss to comment on this year’s expenditure.  We emailed questions to her media advisor at 11.23am on Monday and made a follow-up phone call at 4.12pm yesterday. We have received no response so far. We have now emailed the organisers, asking  what the $190,000 was spent on. We will publish the information when we receive it.

The Alice Springs News Online has reported on public expenditure, and its results, for other festivals as well, including Red Centre NATS and Parrtjima. Google our site for details.