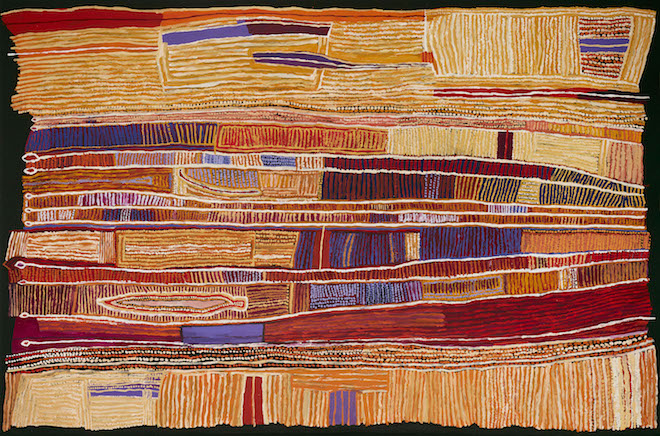 There is no glorification of violence or war in Weapons for the solider, an exhibition that opened at Araluen on the weekend.

For the APY artists involved the show is a meditation on cultural strength and resilience, as the artist and tjilpi Mumu Mike Williams made clear.

He spoke to the opening crowd in Pitjantjatjara, his speech peppered with the words tjukurpa, meaning Anangu creation story, and kulata, meaning spear.

But kulata is also a story for Anangu, as he explained in translation by Frank Young – a story about a strong whirlwind that comes and blows the spear away: “It blows it down on the ground but it won’t break.”

He went on to describe how kulata are made, using the sinews of  kangaroo or emu, and the glue  from spinifex or a special mulga tree. 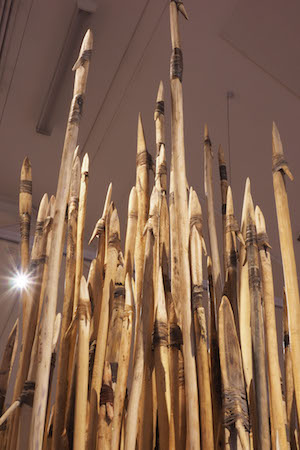 “No whirlwind can push away the spear,” he continued. “Our tjukurpa is like that.”

Then he made the metaphor more explicit: “I’m not talking about whirlwind, I’m talking about something that tries to push away our story, like politics … Any politics can’t push our kulata away, our story is strong, it’s the kulata story.”

Inside the gallery, you see the eloquent expression of that metaphor in sculptural form (detail at left): many spears bound together by a band of red wool, this material chosen no doubt for its reference to the headband worn by initiated men.  Any one spear on its own would fall over, but together, physically and culturally, they stand as tall and sturdy as a tree.

“This kulata tree is about our family,” says Kamurin Young, one of the 25 artists to collaborate on the work, “about looking after our culture and protecting it for the future.”

He explains the way the image of a family tree is understood by Anangu, as he has had it explained to him by his tjamu (grandfather) Frank Young: “The roots are the great-grandparents, the trunks are the men and women, and the leaves are the young people and children. Everybody has a place and everyone is held together.”

This holding takes on a double meaning in a second work featuring spears, where they suggest the  bars of a gaol cell holding the young Aboriginal man in the photograph, at the same time as the strong cultural framework that could be their alternative. Titled Kulata Tjuta – Wati kulunypa tjukurpa, meaning “Many Spears – Youngfella story”, this collaboration by Frank Young, Anwar Young and Unrupa Rhonda Dick (the only woman in the show) won the top prize at the 2017 NATSIAAs (the photo below is from that exhibition). It is as powerful today as it was then in its message to young men to “stand behind culture, not behind bars.”

This needs to be supported, of course, not only by the cooperation of whitefella institutions, in recognising that locking up young men isn’t working, but also by Anangu communities. The tjilpis who work at Tjala Arts have stepped up to the plate on this, maintaining their steady leadership and mentoring of the next generations, specifically with the Kulata Tjuta Project. 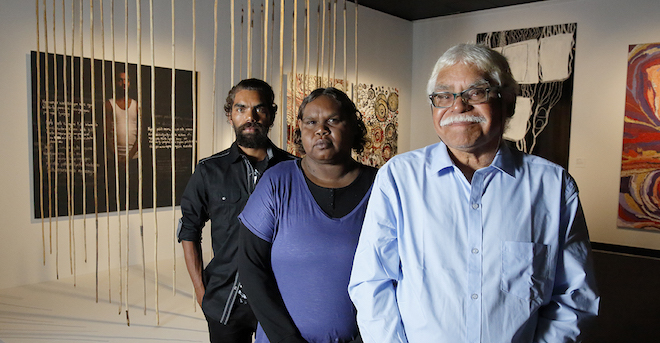 This exhibition is one of its fruits, as it was  the “young fellas” – Vincent Namatjira, Derek Thompson, Kamurin Young, Anwar Young and Aaron Ken – who drove it and who invited both Indigenous and non-indigenous artists from across Australia to be part of it.

They chose its name, Weapons for the soldier, to pay respect to the late Ray Ken and “all the tjilpis”, said Frank Young, who is chairman of the APY Council and a director of Tjala Arts, one of seven art centres on the APY Lands.

Kunmanara Ray Ken also worked at Tjala Arts and he had used the Weapons  title in his paintings for many years. One of them faces the entrance to the exhibition. It reveals the artist painting his favoured subject, kulata, with undiminished power right to the end of his life (he died last year and was born c.1940).

He was one of the first men to start painting on the APY lands and, together with the late Hector Burton (who died in 2017) and Willy Kaika Burton*, he started the Kulata Tjuta Project. At its heart, the project was about passing on to younger men the traditional knowledge of how to make a spear, “important cultural work”.

That cultural work was his uncle’s focus, according to Frank Young: “Ray was never a hard man in his life, he was not a man for fighting. He was a leader with a quiet power and strength; younger men will always look to him, as I do.”

Frank Young spoke movingly of the passing of “four of our brothers”, including Ray Ken,  in the course of the development of this exhibition: “They were important and loved tjilpis, sadly it was their time.”

The works on show “hold the memories of the last days we shared, working, laughing, celebrating, instructing our culture to the younger generation.”

All of this is in such contrast to another work in the show, by one of the invited artists, George Gittoes,  focussing on young men and weapons, and the cultural expression (rap) growing out of that relationship. Violence and war have been subjects of enduring interest for Gittoes.

His Kill Kulture Amerika is a digital video made in Chicago, and ink on paper portraits (above)  of four of the young men who feature in it.

One of them, featuring in the video, not the portraits, is known as Souljah (get it, ‘Soldier’). He had his leg shot to pieces in a street fight. It had to be amputated and he now lives in a wheelchair. This has not turned him and his friends away from gun violence, on the contrary, it is core to their everyday existence and sense of who they are, which is what Gittoes’ video work steadily exposes.

He films in the direct cinema mode, no narration, just observational filming and his subjects speaking to the camera on the day three young men die from gun wounds in the neighbourhood – we see them lying dead in the streets.

Many of his subjects’ friends have died like this. They remember them with fatalistic sadness.

They tell Souljah’s story like it’s a movie or a comic book, the moment of the shooting and its immediate aftermath, all rapid-fire action. They laugh about it. Then there’s the present: he’s alive, for today anyway. They look after him, but this doesn’t include keeping him away from danger.

There is solidarity between them, loads of personality and talent, but nothing protective and, seemingly, a complete absence of any older or wiser heads.

It is riveting viewing, and bleakly tragic in its stark difference from the sanity and the life-affirming coherence of the Kulata Tjuta Project.

The exhibition was developed in partnership between the APY art centres and Hazelhurst Arts Centre in Sydney where it showed over the summer.

*CORRECTION: An earlier version of this article reported that Willy Kaika Burton had died. This is not so. I apologise for the error.