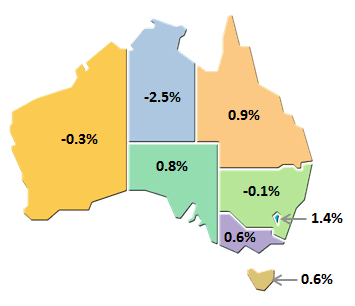 The Northern Territory’s drop in state final demand (SFD) is by far the greatest in the nation, according to the December quarter figures released today by the Australian Bureau of Statistics (ABS).

It says the SFD decreased 2.5% in the December quarter and this follows an 8.4% decrease in the September quarter.

As in the September quarter, the largest detractor from growth was private investment driven by non-dwelling construction, says ABS.

“Public capital was down with a rise by public corporations offset by a decrease from the general government sector.”

The NT’s deep recession continues, says Opposition Leader Gary Higgins, “the worst in the nation by a long way due to poor economic management. People are tightening their belts as a response to the economic conditions.

“This confirms that the economic crisis is real, and real action is required now.

“How many more reports do the government need to finally get the picture? ”

[ED – State final demand measures the total value of goods and services that are sold in a state to buyers who wish to either consume them or retain them in the form of capital assets. It excludes sales made to buyers who use them as inputs to a production activity, export sales and sales that lead to accumulation of inventories.

Measures of state final demand make no distinction between demand that is met by goods and services produced within the state in question, or by supplies sourced from another state, or from overseas. State final demand is therefore not a measure of the value of production activity occurring within a state.]

There is more bad news for the NT as new retail trade figures from the ABS show eight consecutive months of decline in retail trade, says Opposition Leader Gary Higgins in a media release.

Figures show retail trade is down 1.2%, nearly three times worse than the next laggard Queensland at 0.5%.

“It is another sign of Territorians tightening the ir belts in response to the Territory’s dire economic situation,” he says.