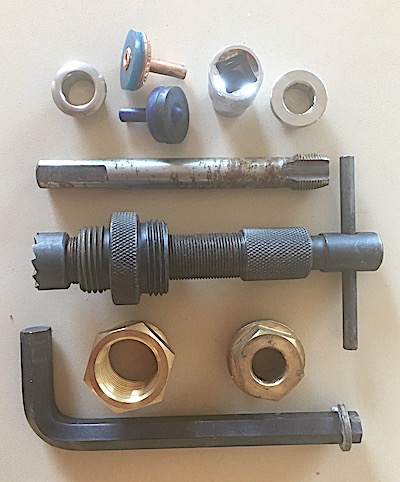 This is a kit for fixing leaking taps.

It takes about 15 minutes to learn how to use it.

Writes one of our readers, about the lack of even the most basic maintenance skills in bush communities: “If only there were unemployed people around who could perform handyman duties (or be training in them) as required, with Housing [Department] picking up the tab.

“Or just keep it as normal and pay $1000 every time there is a leaking tap for a tradie to drive out there and fix it. Sometimes simple suggestions are the best.”

Would he or she soon become a sought-after member of the community? You bet.

Would this be likely to expand to other handyman tasks? Worth a try?

We were trying to discuss this with NT Shelter which, according to its online blurb, is the “the peak body for affordable housing and homelessness” working “towards a just and fairer housing system, particularly for disadvantaged groups and those on low to moderate incomes”.

And it has “a skills-based board”.

Do those skills include fixing taps? Probably not. We can’t find out because they declined to be interviewed despite several requests in the wake of the Santa Teresa legal wrangle.

“We receive funding from the Northern Territory Government’s Department of Housing and Community Development,” the blurb says.

Is the government paying people to tell them how to spend government money likely to result in a fearless and objective examination?

Of course – the blurb says so: “We are grateful for this support [from the government], noting that it does not preclude NT Shelter’s activities and advocacy in its capacity as an independent organisation and peak body.”

NT Shelter’s February 25 media release, quoting CEO Peter McMillan, is predictable and trite, saying the undignified brawl between Senator Nigel Scullion and Chief Minister Michael Gunner over allocation of $550m in taxpayers’ money “is shaping up as a significant blow to the aspirations and prospects of families and children across the Territory … disadvantaged … overcrowded … need to close the gap … kids missing early childhood development and education opportunities … get sick from preventable illnesses … live in poor quality, overcrowded housing.” You get the drift.

Senator Scullion claims Mr Gunner has removed statements about Aboriginal housing from the NT Government’s website to cover up his shortcomings. Mr Gunner neither confirms nor denies that removal.

And so it goes on.

Senator Scullion, with the Federal election about to be called, is donating $300,000 to the Central Land Council. That’s the equivalent of 9196 leaking tap kits.

Except it’s not for anything that useful.

It is for “Aboriginal people in our region [to] have a strong voice on housing matters, and to develop a new approach to housing services in remote communities, in partnership with both levels of government,” as CLC president Francis Kelly is quoted in a CLC media release.

It is for “seeking expert social housing advice; considering relevant social housing models in other states (particularly remote context); building on the significant work of the previous housing forums and involving remote residents in the design of a new model; develop an alternative model for the delivery of remote housing, and consultation with Indigenous stakeholders and government”.

So, after half a century of spending public money on houses for Aboriginal people and endless discussions about that subject, Aborigines still have to get public funding for telling the government how to build houses they don’t have to pay for.