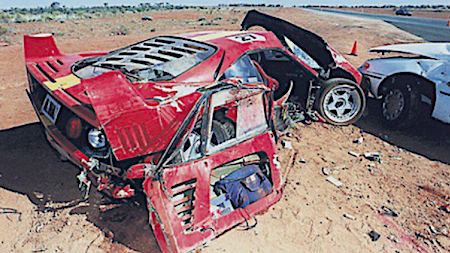 It seems some drivers on the Lasseter Highway are thinking they are re-enacting the 1994 Cannonball Run from Darwin to The Rock.

Police say on Wednesday morning, a 23-year-old male learner driver was stopped after he was detected travelling 183 km/h in a 110 km/h zone.

The man’s vehicle was found to be unregistered and uninsured, the driver had failed to display his L plates and had no licenced passenger. He was issued with a Notice To Appear and conveyed to a nearby community.

The same driver was issued a second infringement notice after he was stopped in the same unregistered and uninsured vehicle that afternoon.

Sergeant Conan Robertson says in a media release that motorists’ attitude to high speeds and their own safety were too blasé: “Motorists were found to be driving 45 km/h above the speed limit. It doesn’t seem to worry some people that if they crash while travelling at these speeds in these remote areas, you are a long way from help.”

A 26-year-old woman was issued with a Notice To Appear after she was clocked travelling 109 km/h in a 60 km/h zone at Mt Ebeneezer on Tuesday afternoon.

Not long after, police issued an infringement notice to an international tourist who was recorded driving 169 km/h in a 110 km/h zone on the Lasseter Highway.

Officers observed the tourist drive off at speed, and later detected him travelling 107 km/h in an 80 km/h zone, and issued him with another traffic infringement.

“If Police had caught him again they would probably have had to arrest him,” said Sgt Robertson is quoted.

Police stopped a 25-year-old man for driving unlicensed, and later that afternoon detected a 26-year-old man travelling 176 km/h in a 130 km/h zone with unsecured loose objects in the tray of his ute.

Four people died in the Cannonball Run when a Ferrari (pictured) driven by a Japanese millionaire crashed into a checkpoint at high speed.