The 2007 booing of Chief Minister Clare Martin (pictured below with minder John Gaynor). 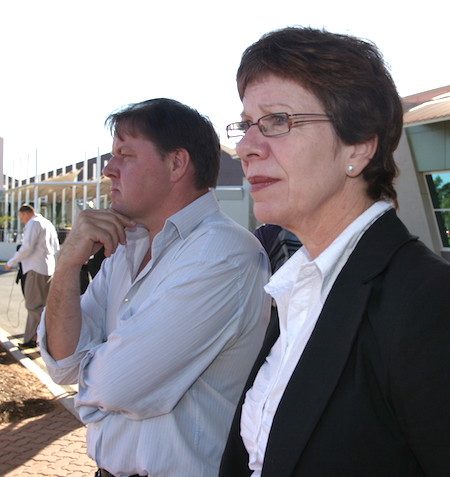 Judging by comments on a popular local Facebook site, which states it has more than 14,000 members, Chief Minister Michael Gunner may be in for a public walloping – metaphorically speaking – in Alice Springs tomorrow, similar to the one experienced by his predecessor Clare Martin (pictured) in April 2007.

We reported at the time that Ms Martin was “subjected to unprecedented anger, with sustained booing and heckling while she spoke to the crowd – a Who’s Who of small local business – gathered to protest about law and order issues as Parliament opened in Alice on Tuesday”.

And now a FB posting says: “Look out Friday. The Chief Minister will be on our streets. Limited time only.”

One respondent adds: “Anyone see this going like Clair [sic] Martin’s visits back when this crap wasn’t being addressed?”

Below is the complete thread but some comments are edited. None of them put Mr Gunner into a positive light:

All safe here, no stolen cars doing excessive speeds or such …

He should do a night visit. Without doing that there is no point.

Mmmm! How can we get him to experience the Real Alice Springs?

Bail him up at The Gap roundabout and give it to him.

Get the f… to sleep in town camps for a few nights and walk the streets after dark.

Ask him to park his car in the open street at night! He can hitch hike to the airport when he leaves.

Long enough to take a photo for the TV.

Send him down the Maul [sic] during witching hour!

WANTED for treason to his people posters.

Holy hell! Didn’t realise he knew that south of Berrimah was part of the NT!

Oh wow. Another waste of money / time / show phony exercise – we NEED results that will give our community confidence to feel safe in their own homes and their ability to conduct their business without the scary bullshit we are currently enduring.

Weak as piss. Sorry but he is here to try and get votes. The so called “local boy” will be snug with his security and sadly the council will clean the place up for him. Police will escort him everywhere and will be home in bed safe by 10.30.

Strewth, never imagined I’d wish for things to be as “safe” as they were back then [during the confrontation with Clare Martin.]

If Dropkick walks into your shop, hand him Your Bill, for all the shop break-ins & Repairs & Stolen Car Repairs & All Your Time Wasted ect. If his totally useless social service criminal pandering wanker groups want to keep letting Juvenile Criminal Evil Off The Hook So Much Then take Them Right The F… Out Of Our Town. Dont Leave them Here, They Have No Civilized Right ‘Black or White’ to be here, if they have No Respect for Anyone or other people’s property.

Maybe he could try eating lunch in yippie at 1 and see if he can find a seat then – might have to come back at 2.05 to eat.

Or even have a appetite after the smell assaults his nostrils.

Coming for pizza in the park??

He probably won’t stay too long in Alice Springs, Just in case lots of Good Law Abiding Black & White Victims of Crime Might want to drag him Up & Down the Mall, Behind a Stolen Car or Two. If he opens his Big Chief Minister Bullshitting Mouth too much, Just Saying!! You All Know!!

The Chief Minister is a f… idiot. Don’t waste your time trying to engage with him. He is weak as piss. I tried once at a function and he looked like a startled rabbit in the headlights, then got his minders to save him from further conversation! And his fat tongue makes him hard to understand anyway. We just need to all hold tight until the next election!

But Mr Gunner might be quite safe. Ms Martin had the decency to front the crowd, outside the Alice Springs Convention Centre where Parliament had a special sitting.

Mr Gunner’s minders have not responded to a request from the News for the Chief Minister’s agenda tomorrow.