Home Issue 10 If NT goes broke, Canberra has to bail us out: Higgins
Issue 10Volume 25

If NT goes broke, Canberra has to bail us out: Higgins 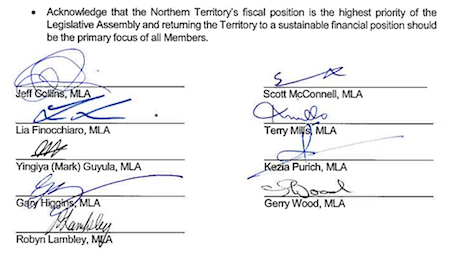 No matter how deeply the NT gets into debt, which Opposition Leader Gary Higgins says is projected to reach $4.5bn by the end of this financial year, the Commonwealth will have to bail us out.

“We have self-government and powers under an Act of the Commonwealth Parliament,” he says. “As such, the Commonwealth has a responsibility to support the Territory, but can also place restrictions on us.

“This could include austerity-type measures that would take away our autonomy. This is the worst-case scenario.”

“While the states have to look after their own debts that is not the case with the NT: The rich uncle with the deep pockets always stands behind it, except he doesn’t have the option of saying “no” to a lender when the Territory is defaulting.

“They are also the ones who give us about 75% of our income.”

This, of course, makes a mockery of the claims by Prime Minister Scott Morrison and NT Senator Nigel Scullion on January 13 that Chief Minister Michael Gunner should not hold his breath waiting for Canberra to bail out his “bankrupt” government.

This is how Mr Higgins says the borrowing works: The NT government offers bonds which are undertakings to repay a certain amount by a certain time.

These investors could be in Australia or overseas.

“I haven’t got a break-down where the money is coming from and I’m not sure the Government would make that information available,” says Mr Higgins.

What would his party do about the NT’s record debt if it occupied the Treasury benches?

Mr Higgins says: “You have to maintain front-line staff but you have to start to identifying savings.

“What we have now is a government that continues to commit to expenditure, which increases our debt.

“We need to identify what we can stop doing and re-direct that money into infrastructure that is going to help private sector investment.

Mr Higgins is reluctant to be specific about where to “identify savings”.

A freeze on executive recruitment is one measure.

He says in January the government advertised for several contract executives earning a total salary of $2.4m a year, with the one heading up the business department on around $350,000 a year.

“You can make savings in every area. Every department has a whole stack of individual programs.”

These should come under the microscope, Mr Higgins says: “Are they achieving what we want them to achieve?”

Meanwhile Mr Higgins has signed a statement (at top) calling for a “whole of Parliament approach to the fiscal crisis”.

Co-signatories are the only other CLP MLA, Lia Finocchiaro, Member for Stuart Scott McConnell who was recently expelled from the Caucus by Chief Minister Michael Gunner for speaking out on his fiscal management, plus Independents Jeff Collins (who has just quit Labor, after also being expelled from Caucus), Yingiya (Mark) Guyula, Araluen’s Robyn Lambley, former CLP Chief Minister Terry Mills, Speaker Kezia Purich and Gerry Wood.