“The fire mapping we have undertaken in 2018 indicates only one or two areas of prescribed burning during the cool months last year, insufficient to prevent the catastrophic bushfire which has swept through most of the West MacDonnell National Park last month.”

The image of this year’s blaze, shown in grey dots (sample at right), stretches from just west of Alice Springs, all the way out to beyond Mount Sonder, encompassing virtually all the locations recognised as the jewels in The Centre’s tourism crown.

Dr Edwards says the discussion in park management about the purpose of precautionary burning is age-old.

It is dominated quite rightly by people focussed on the protection of threatened species. This has become “ingrained” in conservation land management. 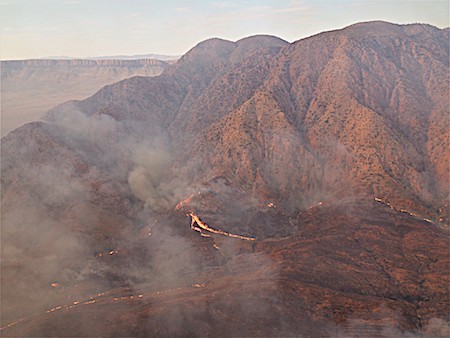 Precautionary burning – reducing fuel load during cool weather when burns can be controlled more easily – is not  done often enough in a strategic way, says Dr Edwards. It needs to somewhat compartmentalise the landscape, usually within catchments, with continuous strips of fuel reduced, thus creating barriers to wildfires, and again this needs to be done at the time of  minimal risk.

Dr Edwards says he had not noticed any such strip burning in the West Macs last year.

The ever increasing frequent dry and hot weather makes prevention of fires even more urgent, he says, as it is creating higher and longer fire danger weather periods.

Dr Edwards says the frequency of fires – this was a third major blaze within 20 years – is increasing the risk of extinctions.

Many local plants and shrubs are “obligate seeders”: They don’t re-sprout but only come back from seeds.

If fires occur too frequently for the seed bank to re-generate then the plant will simply be extinct.

The most recent interval between fire was just seven years – 2011 to 2018 – and Dr Edwards says that interval is critically short. 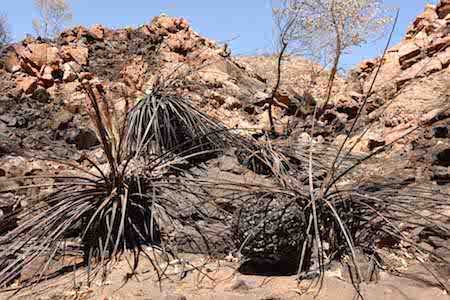 As to animals, birds can usually escape fire, but terrestrial species get caught and killed, taking many years to re-colonise areas where big fires have occurred.

It may take decades for country to recover, depending also on rainfall which in recent years has become fickle, he says.

NOTE: There is still no answer from the NT Government to questions about protection of the park through precautionary burning.