Adelaide's Indigenous gallery out of the starting blocks 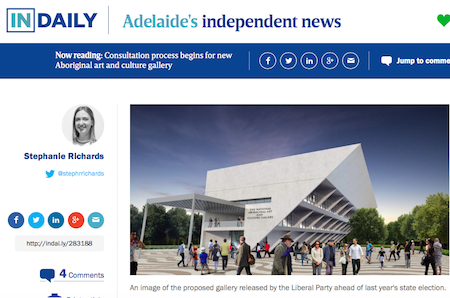 The SA Government has begun consulting with South Australian Aboriginal communities and cultural institutions “to inform the design of its mooted National Gallery for Aboriginal Art and Cultures at the old Royal Adelaide Hospital site”.

The announcement comes as a similar project in Alice Springs has been put on hold by NT Chief Minister Michael Gunner in a volatile disagreement with traditional owners over the government’s insistence on putting the gallery in the Anzac Hill precinct.

“He today announced a $200,000 scoping study, flagged in last year’s budget, had begun to inform the ‘visions and key recommendations’ of the gallery, including its size and connection with Indigenous communities.

In Daily reports Mr Marshall saying the Government had already begun preliminary discussions with stakeholders, with the scoping study to further refine the size and scope of the proposed $60 million gallery.

“This gallery will be the first of its kind in Australia and will allow us to properly recognise and celebrate the oldest living cultural gallery, which will attract both national and international attention.”