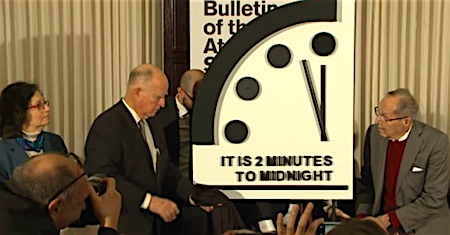 Humanity now faces two simultaneous existential threats, either of which would be cause for extreme concern and immediate attention. These major threats—nuclear weapons and climate change—were exacerbated this past year by the increased use of information warfare to undermine democracy around the world, amplifying risk from these and other threats and putting the future of civilisation in extraordinary danger.

This situation is described as “A new abnormal” in the annual Doomsday Clock announcement by the Science and Security Board of the Bulletin of the Atomic Scientists.

The Bulletin was founded in 1945 by University of Chicago scientists who had helped develop the first atomic weapons in the Manhattan Project.

They created the Doomsday Clock two years later, using the imagery of apocalypse (midnight) and the contemporary idiom of nuclear explosion (countdown to zero) to convey threats to humanity and the planet. The decision to move (or to leave in place) the minute hand of the Doomsday Clock is made every year by the board in consultation with its Board of Sponsors, which includes 15 Nobel laureates. The Clock has become a universally recognised indicator of the world’s vulnerability to catastrophe from nuclear weapons, climate change, and new technologies emerging in other domains.

In this year’s statement the board goes on to say:

In the nuclear realm, the United States abandoned the Iran nuclear deal and announced it would withdraw from the Intermediate-range Nuclear Forces Treaty (INF), grave steps towards a complete dismantlement of the global arms control process.

Although the United States and North Korea moved away from the bellicose rhetoric of 2017, the urgent North Korean nuclear dilemma remains unresolved.

Meanwhile, the world’s nuclear nations proceeded with programs of “nuclear modernization” that are all but indistinguishable from a worldwide arms race, and the military doctrines of Russia and the United States have increasingly eroded the long-held taboo against the use of nuclear weapons.

On the climate change front, global carbon dioxide emissions—which seemed to plateau earlier this decade—resumed an upward climb in 2017 and 2018. To halt the worst effects of climate change, the countries of the world must cut net worldwide carbon dioxide emissions to zero by well before the end of the century. By such a measure, the world community failed dismally last year.

At the same time, the main global accord on addressing climate change—the 2015 Paris agreement—has become increasingly beleaguered.The United States announced it will withdraw from that pact, and at the December climate summit in Poland, the United States allied itself with Russia, Saudi Arabia, and Kuwait (all major petroleum-producing countries) to undercut an expert report on climate change impacts that the Paris climate conference had itself commissioned.

Amid these unfortunate nuclear and climate developments, there was a rise during the last year in the intentional corruption of the information ecosystem on which modern civilization depends. In many forums, including particularly social media, nationalist leaders and their surrogates lied shamelessly, insisting that their lies were truth, and the truth “fake news.” These intentional attempts to distort reality exaggerate social divisions, undermine trust in science, and diminish confidence in elections and democratic institutions. Because these distortions attack the rational discourse required for solving the complex problems facing humanity, cyber-enabled information warfare aggravates other major global dangers—including those posed by nuclear weapons and climate change—as it undermines civilization generally.

There is nothing normal about the complex and frightening reality just described.

The board today [24 January] sets the Doomsday Clock at two minutes to midnight—the closest it has ever been to apocalypse. Though unchanged from 2018, this setting should be taken not as a sign of stability but as a stark warning to leaders and citizens around the world.

The current international security situation—what we call the “new abnormal”—has extended over two years now. It’s a state as worrisome as the most dangerous times of the Cold War, a state that features an unpredictable and shifting landscape of simmering disputes that multiply the chances for major military conflict to erupt.

This new abnormal is simply too volatile and dangerous to accept as a continuing state of world affairs.

Dire as the present may seem, there is nothing hopeless or predestined about the future. The Bulletin resolutely believes that human beings can manage the dangers posed by the technology that humans create. Indeed, in the 1990s, leaders in the United States and the Soviet Union took bold action that made nuclear war markedly less likely—and that led the Bulletin to move the minute hand of the Doomsday Clock far from midnight.

But threats must be acknowledged before they can be effectively confronted. The current situation—in which intersecting nuclear, climate, and information warfare threats all go insufficiently recognized and addressed, when they are not simply ignored or denied—is unsustainable.

The longer world leaders and citizens carelessly inhabit this new and abnormal reality, the more likely the world is to experience catastrophe of historic proportions.


For the full statement, see here.