NT tourism turbocharger out of gas as Feds eye off Kakadu 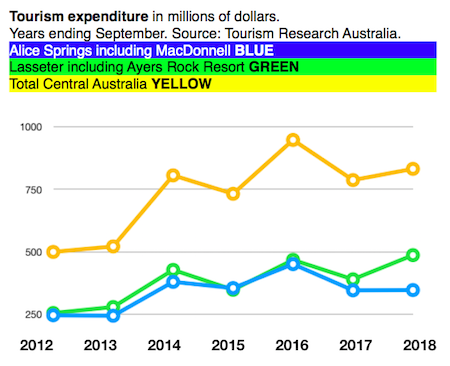 The government’s “record $103m Turbocharging Tourism stimulus package” announced in February last year is sputtering rather than roaring, at least so far as The Centre is concerned.

Meanwhile the eyes of the Federal Government and Opposition alike are fixed on the Top End, with hundreds of millions of dollars promised to boost tourism in Kakadu.

However, in The Centre figures released by Tourism Research Australia show poor results for Alice Springs and MacDonnell, starting to dip in 2016 – when Labor gained government – and remaining low (see graph).

Ms Moss concedes in a media release that “visitation to the Territory has been on a soft downward trend for the last two years” but says “the latest figures are cause for optimism”.

She points to domestic holiday visitation Territory-wide in the year ending September 2018 experiencing “strong growth “up 13% per cent to 657,000 visitors, the highest level recorded by the National Visitor Survey since it commenced in 1998”.

As the Federal election campaign is heading for the sharp end Prime Minister Scott Morrison is promising “up to $216m to upgrade Kakadu National Park, and support the township of Jabiru “transition to a tourism-based economy.

“Better services and infrastructure for Kakadu will mean more visitors and that means more jobs not just for Jabiru, but for the whole Territory,” says a media release from Mr Morrison who is in Jabiru today.

He says he has been “working closely” with CLP candidate for Lingiari Jacinta Price whose home communities in The Centre are unlikely to get much joy from Federal money being pumped into the Top End.

Not to be outdone Opposition Leader Bill Shorten says in a media release that a Shorten Labor Government would invest $220m – $4m more that the government – in infrastructure and community development projects “to dramatically improve Kakadu National Park as a tourist destination and secure the future of the township of Jabiru.” 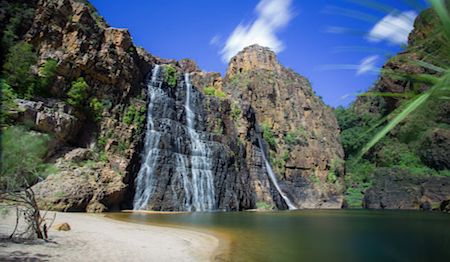 Mr Shorten will be in Kakadu (pictured, photo by Christopher Nobs) tomorrow.

He says the proposed “investment” will include $100m to upgrade four key access roads in the park, to allow for year-round access to key sites; $44m for environmental and national park infrastructure upgrades, including work to tackle invasive species, better fire management, and improved camping facilities and car parking; and $25m for a new Kakadu visitor and world heritage interpretive centre in Jabiru.