Firm 'no' from PM, Scullion to bailing out 'bankrupt' Territory 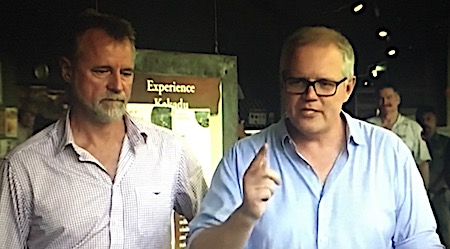 Chief Minister Michael Gunner should not hold his breath waiting for Canberra to bail out his “bankrupt” government, judging from statements by Prime Minister Scott Morrison at a media doorstop in Jabiru today, supported by Territory Senator Nigel Scullion (picture ABC TV News).

“I mean, there comes a time when these guys have got to do their own heavy lifting,” said Mr Morrison .

“I don’t think it’s the Commonwealth’s job – and Commonwealth taxpayers’ – to pay for the mismanagement of state or territory governments.

“We’ve already stumped up a billion dollars and more … into the Territory just in my time as Treasurer and Prime Minister, whether it’s on GST top-ups, support for Indigenous housing in remote areas, the Darwin City Deal, today over $200m to invest in infrastructure that will create jobs and economic activity, which will support revenues to the Northern Territory Government,

“Now, Bill Shorten might want to come up here and use Federal taxpayers’ moneys to bail out his mates in the Labor Government.

“That’s not what we’re doing.

“The Territory Government has to sort out their own problems, okay?

“That’s what running a Budget does, so they can read my Budgets and take whatever tips they like.

“But it’s for them to work out how to sort out the financial mess that they’ve got themselves into.

“I get on very well with the Treasurer [Nicole Manison] up here. She didn’t even have to ask when it came to the GST top-up of almost $260m.”

Said Senator Scullion: “This is the first time the Territory is actually bankrupt. I’m just really ashamed of that.

“I don’t want [the Territory] to be some completely mendicant [begging], dependent state of the Commonwealth.

“But we’re not about to just simply take over the Territory [which is] given funds from the Commonwealth for health, they’re given massive funds for education. It’s about how they manage those funds.

“Yes, there seems to be continual mismanagement at a very grassroots management level.

“The Commonwealth Government is not going to manage the shifts and who actually looks after prisons.