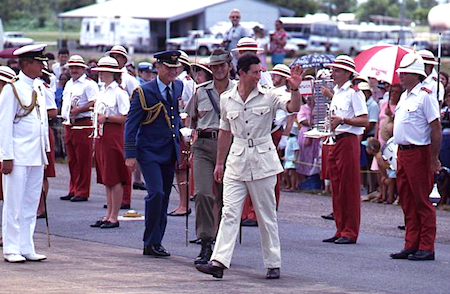 Sir – Territorians have been given new insight into life in the Territory 30 years ago following the release of the 1988 Cabinet records.

In a case of déjà vu, 1988 saw a khaki-clad Prince Charles (pictured, ABC & “supplied”) visit the Territory for a two-day whirlwind trip with Princess Diana, which saw the pair visit the Darwin Crocodile Farm.

Fast forward 30 years and His Royal Highness paid his sixth visit the Territory in April 2018, visiting Arnhem Land and Darwin.

Crocodile Dundee II shone on the silver screen while John Farnham’s Age of Reason hit the airwaves along with the Dirty Dancing classic, (I’ve had) The time of my life.

Tennant Creek was hit by a 6.6 magnitude earthquake, which is still Australia’s largest ever.

There was also a shake-up in Territory politics, when Marshall Perron became Chief Minister after Steve Hatton resigned.

As the Territory economy began to take off, particularly in mining and gold production, 1988 saw Cabinet introduce a new two-man NT Police Force Gold Squad to monitor criminal activity that was robbing the government of royalties.

New industries were also explored with Cabinet endorsing the testing of the Kenaf crop, a tropical hibiscus plant, which could be potentially be turned into paper.

Tourism remained high the agenda with Cabinet passing a five year proposal that outlined the future development of the Territory’s key parks in the Top End and Red Centre, including potential upgrades to facilities and the improvement of road access.

Cabinet records are made public 30 years after they are created under the Northern Territory Information Act.