The Territory is broke 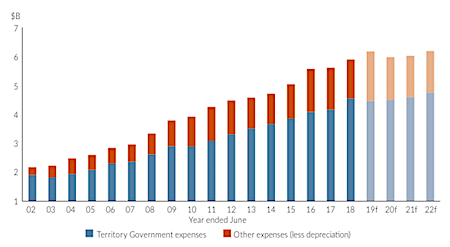 “If Territory Government spending continues to grow as it has in the past, the Territory’s net debt is projected to increase tenfold from $3 billion in 2017-18 to $35.7 billion by 2029-30.

“The net debt to revenue ratio would be increasing to around 320% and the annual interest bill rising to almost $2 billion.

“Such an outcome would have severe economic consequences for Territorians,” a government commissioned assessment of the Northern Territory’s fiscal position observes drily.

The interim report overview, by “independent experts”  unnamed in the government’s media release, was put out for public comment yesterday by Treasurer Nicole Manison with the kind of spin that has become the hallmark for the Gunner government, “Restoring Trust: A Plan for Budget Repair”.

Ms Manison says in a media release that the “hurt” was caused “by unprecedented GST reductions of $500m per annum, the tough economic times with the wind down of the INPEX construction project, and the increasing demand on Government services.

“Combined, these mounting pressures are pushing the Territory budget to unsustainable levels and revision of the Government’s fiscal strategy is needed.”

She gives no explanation why the Labor Party, while still in Opposition and then in Government, made no provision for the entirely predictable conclusion of the INPEX construction, which the interim report describes graphically: “This fall in GST revenues has also coincided with a pronounced moderation in the Territory economy, reflecting the transition of one of the largest ever projects in the southern hemisphere, the Ichthys liquefied natural gas project, from the construction phase with a peak workforce of over 10,000 to the operational phase with a workforce of around 400.”

Instead the new government continued the profligate spending (see table above, expenditure growth over time; excludes depreciation; “other expenses” are primarily tied funds from the Commonwealth).

Next week Ms Manison (pictured) will go to Canberra, asking for a bailout.

The report urges substantial public service belt tightening and forecasts, as a possible saviour, in five years’ time, the income from natural gas, at least some if it obtained by fracking, something many Labor voters in 2016 assumed their preferred party was opposed to.

Says the interim report: “When the government came to power in August 2016, the Territory had been enjoying the highest level of untied GST revenue since the GST commenced in 2000-01.

It says the government yielded to increased demands for government services, “notwithstanding that population growth, and rising community expectations regarding service standards have seen the cost of public services continue to grow despite the revenue declines.

“This trend has further compounded the Territory’s fiscal challenges. The current Territory Government has also faced unexpected expenditure demands such as the need to respond to the Royal Commission into the Protection and Detention of Children in the Northern Territory.

“The culmination of these events has placed the Territory Budget on a debt and deficit trajectory which is unsustainable.

“In 2018-19, the Territory is forecast to spend over $1.5 billion, or $4m a day more than the revenue it collects, and is borrowing to meet the shortfall.”

The report says there have been budget repair measures of around $830m between 2017-18 and 2021-22. Despite these measures, significant budget deficits are forecast across the forward estimates.

“This can be achieved through reorganising how the public sector operates, enforcing greater discipline around meeting budget targets at the agency level, and looking at greater technological means to deliver services more efficiently.

“These reforms can be achieved while maintaining public sector employment levels and service delivery to remote areas.

“Scenario 2 assumes a new fiscal strategy is implemented, which restrains expenditure growth over the projection period to around 3% per annum (reflecting CPI plus long-term population growth less a reform dividend).

“As in scenario 1, growth in Territory revenue is assumed in five years’ time when onshore gas operations commence.”

“The government is borrowing on the credit card to pay wages. [Labor’s] own Mid-Year Report said the single biggest reason for the deterioration in the budgetary position is ‘policy changes’ to the tune of $354 million.

“We don’t deny the impact of reduced GST receipts and the movement of the Inpex project into operational phase. But one of the fundamental roles of Government is to manage through the down times, to spend wisely and invest in wealth creation and to incentivise business and investment.

“Instead, Labor has implemented the world’s worst mining tax and an unreasonable property levy, spent widely on consultants, reviews and reports and museums which were shelved and dithered on allowing gas exploration in the Territory.”