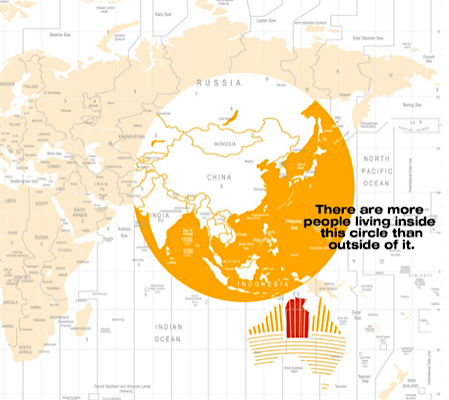 Just 5% of Australia’s population living in the top half the nation’s land mass are producing 60% of the country’s total exports.

Huge markets, close to half the earth’s population, lie just to our north  (the area inside the circle on the map at right).

The world’s two largest economies will soon be India and China and Indonesia is edging to become number four or five: What a prospect for our prosperity!

However, Developing the North has many dimensions, some more worrying.

“The security of our region is tied up with our proximity to what is increasingly an anxious region,” said Luke Bowen, general manager of Northern Australia Development and Trade.

And not all the issues raised by him and some 50 business and government people at the Desert Park this morning were global: they ranged all the way to the red tape tied up with building a house.

Some of the numbers presented were a bit scary: The NT’s Economic Cycle had peaked in 1999, 2007 and 2013, each one around 12%, mirrored by the employment level. (The economic cycle is the natural fluctuation of the economy between periods of expansion – growth – and contraction – recession. Factors such as gross domestic product, interest rates, levels of employment and consumer spending can help to determine the current stage of the economic cycle.)


Now the Economic Cycle has reached 0% and the forecast is it will be in minus territory until 2020.

The population is pretty well flatlining.

Net interstate migration in the NT has been decreasing since 2009 and is tipped to reach nearly minus 6% this year.

The government’s major projects come in two categories. “Included in forecasts” are $1.1 billion for remote housing plus $426m for headworks infrastructure to support it; $544m roads and transport infrastructure, and a $120m contribution to the “City Deals” CBD revitalisation in Darwin and Alice Springs (the latter getting $15m).

“Not included in the forecasts” are five mining projects in the Alice region, expected to have about $5 billion [corrected from $5m – ED] in investment “should they come on line”.

The exploration boom from 2007 to 2011 had led to new discoveries and identified resources. Now activity remains relatively low (37% of the 2011 peak), but is recovering.

Ayers Rock (Connellan) Airport will get runway resurfacing and lighting  worth $28m.

May Taylor, from the Department of Infrastructure, Planning and Logistics, also said the Tanami Road would have money spent on it as a matter of priority.

Mayor Damien Ryan, speaking on behalf of the Local Government Association, said the remote housing expenditure “continues to be talked about” but there is little action on the ground.

Ms Taylor explained the $1.1 billion is to be spent over 10 years including $500m for new homes, plus $200m each for extending living spaces, government employee housing and repairs and maintenance.

To simplify that would not only make life easier for the builders, he said, but also make it less daunting for people looking to invest their money in bricks and mortar.

Unemployment at 4% is more than 1% below the nation’s.

Employment in Central Australia in tourism and hospitality dropped from about 2400 people in 2007 to about 1300 in 2017.

We have 2016 local businesses and the largest industry – no surprise – is public administration and safety – cops, courts and prisons. (It’s not clear whether this picture of the economy includes Pine Gap.)

There are odd shortcomings in some statistics: The total value of the NT’s agribusiness sector is given as $736m but Mr Bowen said that’s about the earnings of the cattle industry alone. (He should know – he used to run the Cattlemen’s Association.)

The presentation had cattle as 44% of the agri sector.

The association’s president, Chris Nott, expressed concern about possible “draconian” government regulations about land clearing, which could be inspired by people lodging objections from interstate, and preventing the industry from trebling its income.

Given past experience interstate there was no need to re-invent the wheel, Mr Nott suggested.

Vinnie Lange, from Centrefarm, countered that we could also learn from mistakes interstate, the Murray Darling being one example.

Early harvest grapes and water melons are doing well except that getting workers is made harder by changed visa regulations for backpackers and delays with bringing in a new regime.

Because of labour shortage one grower could bring in only 60% of his available harvest.

It would be great if the locals would do some of the work, said Stuart Smith, from the Department of Primary Industry and Resources. 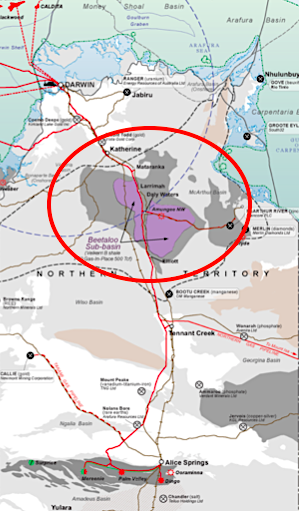 The crowd was told Origin and Santos are seeking to prove up reserves very likely to be of “monumental” dimensions now that the controversies over fracking seem to have been resolved – to the satisfaction of the NT Government, anyway.

The Beetaloo basin (circled) south of Katherine is the place to be, and the first gas is now flowing to the eastern states through the new Tennant Creek to Mt Isa pipeline.

Further pipelines are mooted, running north and south, supplying the fuel hungry south-east of the nation while acting as an “enabler” for industries along the way.

The apparently massive availability of gas raises questions about Australia’s management of fuel for all our vehicles and aircraft: We have reserves only for two weeks at any time, and most of it comes through the South China Sea and the Straits of Malacca.

However, suggests Mr Bowen, hydrogen fuel may well take over in 50 years’ time, produced with The Centre’s abundant solar electricity.