Parrtjima lights left on in the mall (above) after the recent festival have been a hit with business-owners, the Town Council heard last night.

Councillor Marli Banks and Deputy Mayor Matt Paterson both said they had received enthusiastic feedback from Todd Mall traders about the benefits to their businesses from the lights.

Council will talk to NT Major Events who own the projection equipment used about the possibility of keeping the installation going.

Meanwhile, DM Paterson shared with council his ideas about developing an outdoor community space on the banks of the Todd River. 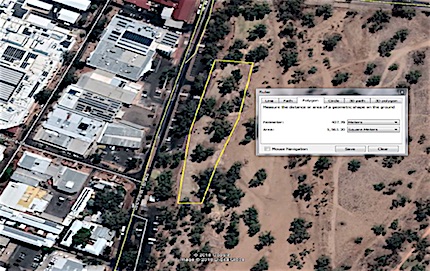 The area, some 5,500 sqm, is council-owned, stretching between Wills Terrace and Gregory Terrace, and between the riverside carparks and the river channel. An existing walking / riding track  goes through the site.

The park would be accessible for everyone, suggest DM Paterson, including disabled people, and would seek to involve local youth in its design from the outset.

“This program can enable youth from the beginning of the project as ambassadors, then through the design stage and into planning for future requirements for the outdoor space. Often our young people are left out of the decision-making process in outcomes that affect them directly. Empowering our youth through shared decision-making creates opportunities to learn, practise and an increase of skills,” he writes in his nine-page document outlining the “business case” for the park.

Among his suggestions for its facilities are a half-court basketball court, table tennis tables, large play equipment space, accessible swings including the council-owned Liberty swing, a bike/scooter/skate friendly area (all ages),  a workout station, and a skate park of modular design, allowing its challenges to be varied.

Trees on the site should be protected during construction and, it would seem from his proposal, subsequently: “Understanding cultural sensitivities, these trees will not be touched during the works and will provide natural shade for the outdoor space. A way to protect the trees could be to install balustrades around the trees with aboriginal art work on them,” he writes.

Overall his vision is for “a gathering area for Mums & Dads to bring their children into town and to promote social cohesion”.

It will be a “one of a kind design that celebrates the natural surrounds of the landscape, and delivers a development that is beneficial to our community, yet respects the cultural sensitivities surrounding the area.

Key points that will make this project a success, says DM Paterson, included “easy and accessible parking, a disabled friendly space that promotes inclusion within our community, existing amenities on site and the closeness to cafes and shops.”

He estimates construction cost at $2m to $2.5m. 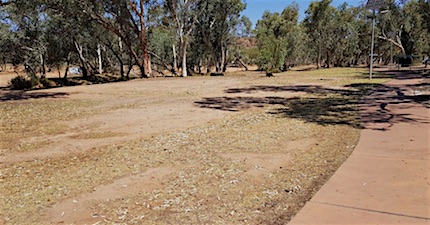 Councillors generally welcomed his proposal. A report will now be prepared by officers for consideration at the end of the month meeting. CEO Rex Mooney said the proposal has major financial and other implications, but he also noted that council has a small surplus and there are grant opportunities to support such a project.

Left: The area as it is today.

In public question time, local historian Alex Nelson, who had heard DM Paterson discussing his idea on ABC radio, commented that it would be a “major step in the right direction”, and “the equivalent of an esplanade for the town centre”.

He also noted that almost 50 years ago, in early June 1969, a syndicate of business people from South Australia, put forward a proposal for that stretch of the river bank, pushing out into the river bed, that included a hotel, supermarket, carpark, tavern and theatre.

It was considered by the Town Management Board of the time but vociferously opposed by local businesswoman, Marlene Brown, the only woman on board.

She won the day and “quite honestly, it would have been a disaster, no doubt about it”, said Mr Nelson.

Ms Brown went on to be the first female town councillor, topping the poll of the 30 candidates standing.

Mr Nelson, getting in well early, suggested that the park, should it eventuate, be named after her.

In other council news:-

Cr Banks suggested council review the practice of public places and animal control infringement notices, few of which are paid. Are the administrative steps around the notices worth council’s while? she asked. She suggested council could review the effectiveness of this policy and operational process.

Cr Jimmy Cocking agreed, adding that the apparent impossibility of enforcement could actually be counter-productive, leading to a “sense of lawlessness”.  Council could look at what other jurisdictions do by way of deterrence.

Cr Eli Melky suggested it may be appropriate to issue community service orders instead. For example, people unable to pay could help pick up shopping trolleys left around town.

He went on to argue for a more effective council response to hooning, following ongoing reports from the Braitling area, particular Dixon Road, of hooning in cars.

He suggested stepping up penalties by, for example, impounding vehicles, and naming and shaming.

Council’s solicitor in the first instance will be asked to provide legal advice on strengthened by-laws.

There was pushback from some councillors on what they saw as over-simplification of council policies, all of which are currently under review.

The case in point was council’s trees policy, which Cr Cocking wants to ensure continues to have a focus on tree maintenance, not only planting.

Mayor Damien Ryan felt that the issues are adequately taken care of by council’s budgeting process, but Cr Cocking maintained his insistence on the need to “flesh out” the policy, especially in light of the contribution of trees in the area of climate action. (Council has just released its climate action plan for public comment.)

It was agreed to defer further discussion on the policy to the council forum next February.

It’s not pruning, but “butchering”, he said of trees on the North Stuart Highway.

Hadn’t there been an agreement after controversy last year that an arborist would accompany the lopping team? he asked Director of Technical Services Scott Allen.

Mr Allen said he would chase it up today.

Cr Cocking asked about the preparation of the environmental management plan regarding the installation of lights at Albrecht Oval.

Mr Allen said a local company will write the EMP, which will then go to public consultation.

Cr Cocking suggested it may be better to engage constituents in developing the plan, rather than after the fact. He commented on the “fair bit of angst” amongst residents around that process, asking at what point those views and amenity would be considered.

Mr Allen reiterated what he had already said about the process.