Step closer for rare earth mine employing up to 370 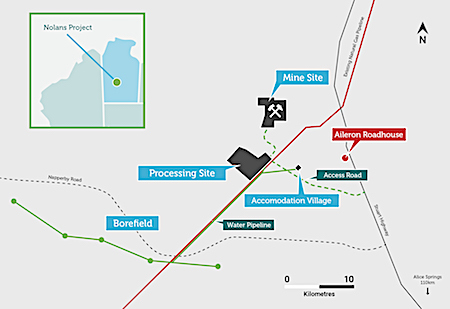 Australian rare earths developer, Arafura Resources Limited, plans to move the final separation plant of its Nolans project to Central Australia, in a project that has yet to secure finance.

The company says in a media release today that the plant will add refining into a high-value oxide and other rare earth products, to the mining, crushing and initial processing of the ore at the location north of Alice Springs.

It had been considered to do the refining overseas, possibly in South Korea, says the statement.

The company’s site is near Aileron, about 135 km north north-west of Alice Springs and 10 km west of the Stuart Highway, and will have a workforce of between 350 and 370 full-time staff and contractors.

The project is expected to produce 3,600 tonnes – or about 10% of the world’s demand – of Neodymium-Praseodymium (NdPr) rare earths, used in ultra-strong permanent magnets, and 110,000 tonnes of phosphoric acid for use in agricultural fertilisers, each year.

The statement says Nolans has Major Project Status from the NT and Australian governments and recently received environmental approvals from both.

The release says studies have indicated the additional processes “will not result in any additional impact outside the operation’s footprint, as covered in the project’s Environmental Impact Statement (EIS).

“Water will be drawn from the proposed borefield south-west of the site, from an extensive aquifer discovered during a water exploration drilling campaign by Arafura,” says Managing Director Gavin Lockyer (pictured).

“With encouragement from the NT Government, we will now submit a variation to our EIS.

“Arafura will work with local industry groups, such as the Chamber of Commerce and Industry Capability Network, to maximise local procurement and local jobs and training, including for local Aboriginal people.

“Arafura is negotiating an agreement through the Central Land Council that will deliver benefits to traditional owners of the site,” Mr Lockyer says.

“NdPr rare earths are in high demand from magnet manufacturers across the globe.

“Arafura is on track to complete its definitive feasibility study in the next few weeks.

“It is continuing with project finance and negotiating product sales agreements, so a final investment decision can be made in 2019.

“Based on Arafura’s recent estimates, the entire project will require a capital investment of US$680m to develop and bring into production.”