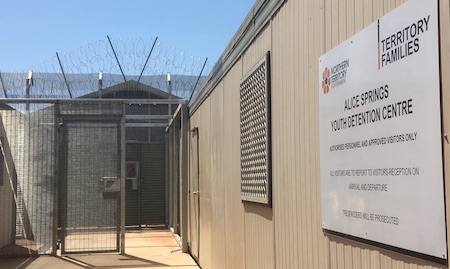 The two new youth detention centres cannot be built in residential or industrial areas as planned by the Gunner Government.

Given the riots and breakouts we have seen in our centres over the past 12 months, the proposed sites of Kilgariff (Alice Springs) and Pinelands (Darwin) are totally unsuitable.

If these kids can escape from a former maximum security prison (now Don Dale) then they will escape from any facility. It is deeply unfair to compromise the safety and security of nearby residents and businesses.

Youth detention in the NT has gone from bad to worse over the past two years under the Gunner Government.

The overnight riot at Don Dale highlights the failings of the new approach taken by the Government.

It is obvious that if the NT Labor Government continues on the naive path it has set, the outlook is bleak, there will be no improvement.

● Restore order by bringing these facilities under the control of Corrections.

● Build new facilities in the Top End and the Centre that are near existing Corrections facilities.

You cannot deny that these young offenders are deeply troubled and suffer a range underlying emotional and psychological problems and that needs to be considered in any response.

However these detainees have also committed serious offences against our community and a balanced tough love response is needed.

Anything less than a tough response will be viewed with contempt by young tough offenders. The reality is that youth justice workers alone do not have the skills or capability to manage these kids.

We now have two major incidents of riots in detention centres over the past six months when youth justice workers have been completely out of their depth and unable to contain the violent behaviour of detainees.

In both these cases they have been forced to call on police and Corrections officers for assistance.

The Gunner Government needs to get their heads out of the clouds and take a fair and common sense approach to youth detention.

The Royal Commission into the Protection and Detention of Children in the NT gave us some ideas and principles to follow. How we implement the recommendations into the Territory context is our decision.

The police union lashed out at the Department of Families over the Don Dale riot.

NTPA President Paul McCue said it “saw teenage offenders allegedly steal a set of keys, get hold of angle grinders in an alleged attempt to cut their way free of the facility, as well as obtaining an accelerant before setting a building alight.

“Police officers were called in to quell the riot and were pelted with projectiles … a police vehicle was also damaged during the riot.

“The Minister responsible must be held to account for this.

“It is particularly galling that police were put in danger, to clean up another government department’s mess, that should have been avoidable in the first place,” said Mr McCue.

Leader of the Opposition, Gary Higgins, calls for CCTV camera vision of the Don Dale riot to be released immediately.

Mr Higgins says in a media release: “Yesterday the Minister for Territory Families, Dale Wakefield, misleadingly stated that CCTV footage of the Don Dale riot earlier this week may not be available due to a fire in the education building of the facility.

“This claim is clearly false. On radio the Children’s Commissioner stated that she had been shown and reviewed CCTV footage from the incident. Similarly, the Deputy Leader of the Opposition, had CCTV footage described to her during a briefing from Territory Families executive staff,” says Mr Higgins.

“The Labor Government needs to come clean with Territorians and release the vision of the Don Dale incident, so that proper scrutiny of the Government’s management of that facility can take place.

“In 2014, then Shadow Minister for Corrections, Michael Gunner, stated that it was a ‘shocking situation’ for a riot to take place at Don Dale where ‘the only solution [was] for them to be tear gassed’.

“Mr Gunner went on to state that tear gas is a powerful and painful chemical and we need to know what led to it being used.

“The Opposition emphatically agrees with the then-Shadow Minister’s point and calls on the now-Chief Minister to immediately make CCTV footage of the incident available for public review.

“In the event that the Government arrogantly chooses to continue to cover up the details of this incident, the Opposition will file a freedom of information request under the Information Act to seek the disclosure of this critical vision,” said Mr Higgins.